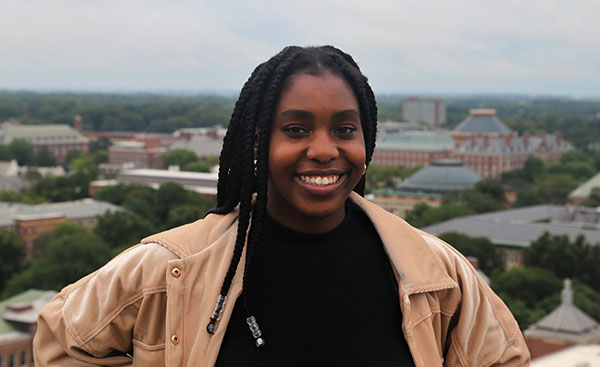 In the third installment of Illinois Public Media’s American Portrait | Central Illinois, a College of Media student shares her journey while living alone on campus, decidedly making the best of the circumstances she was thrust into because of the pandemic.

“Shavonne’s Year”—which will be released across Illinois Public Media’s social media channels on Sundays at 6 p.m. from September 12 through November 14—showcases Shavonne Cole, a senior in media and cinema studies, through her own lens. Using her iPhone, Cole documents her time working at campus jobs, learning to cook, exploring the Champaign-Urbana community, creating projects for herself, celebrating her 21st birthday, and more.

“It really is a glimpse into the life of a young woman who finds herself taking on adult responsibilities a bit earlier than she had anticipated,” said Sarah Weinstein Edwards, senior producer/director of the Illinois Public Media series. “And what I loved seeing, as she submitted videos month after month, was her positive attitude and goal-oriented spirit.”

American Portrait is a national PBS series in which Americans document their lives using their own devices.

“Mostly, people submit videos talking about their lives: their hopes, dreams, job, a story about their family, etc.,” Weinstein Edwards said. “When the COVID-19 pandemic started, we decided to localize the national American Portrait effort to the people and stories in this part of Illinois.”

Illinois Public Media’s first episode—which aired on WILL-TV—featured a pastor, a high school senior, a grocery store operator, a nurse and father, a small business owner, and an oil producer documenting the initial impact of the pandemic on their everyday lives. The second episode focused on three choral groups as they explored how to sing together safely.

Cole, who enjoys creating through videography and wants to pursue a career in film, was excited to gain experience in storytelling and video production through this project. Last year, she also took a Media course in Smartphone Cinema, which helped her produce the videos and learn more about creative shots, lighting, and sound.

One of her favorite episodes was when she figured out how to create a DIY photography studio in her apartment. “It was a lot of fun and the pictures turned out great,” she said.

Cole hopes viewers will appreciate how she finds joy and peacefulness while being alone.

“You learn so much about yourself and grow tremendously,” she said. “It was just myself in my rawest form on camera.”

“It’s reflective of what many Americans have experienced during the pandemic,” Weinstein Edwards said. “She has made the most of a weird, lonely, and trying year.”