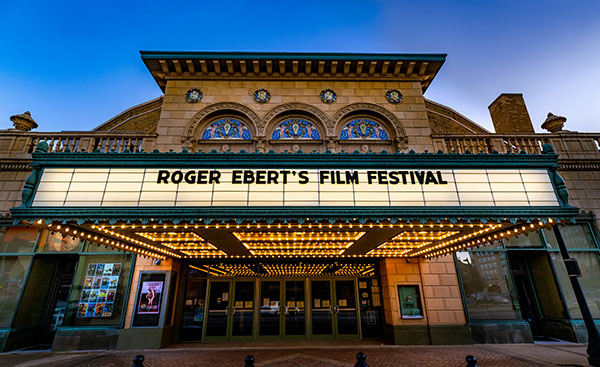 Update 4/13/2022: Comedian and actor Gilbert Gottfried was originally scheduled to be one of the headlining guests at Ebertfest, accompanying the documentary Gilbert. Because of Gottfried's death on April 12, Ebertfest will be dedicating its 22nd annual event in his honor.

The 22nd Annual Roger Ebert’s Film Festival, co-founded and hosted by Chaz Ebert and also known as Ebertfest, announced additional actors and musicians who will appear as guests, as well as a bonus film, at this year’s festival, to be held April 20-23 at The Virginia Theatre.

Acting since age 4, Birch’s credits include iconic roles in movies such as Ghost World, which is featured in this year’s Ebertfest; American Beauty, Now and Then, and Hocus Pocus. Birch has won SAG Awards and multiple Young Artist Awards, and has been nominated for Golden Globe, Emmy, and BAFTA awards.

Sodaro achieved stardom in the 2015 TV series Clipped and in the small screen’s Disjointed from 2017-18, among many other roles in her career. An actor in the Ebertfest film Golden Arm, Sodaro joins other guests from the movie including actor Olivia Stambouliah; writers Ann Marie Allison and Jenna Milly; and producer Brigid Brakefield.

The movie Soy Cubana will be followed by a musical performance from a band of current and former University of Illinois Urbana-Champaign Latin Jazz Combo musicians, featuring guest vocalist Stephanie Woods Machado and musical director Tito Carrillo. The band will perform rhythms inspired by the movie’s Afro-Cuban music.

An additional special guest attending Ebertfest this year is executive producer Chris Kelly. Associated with acclaimed independent films including Jiro Dreams of Sushi, Olive, and Once Upon a Time in Queens, Kelly also is a co-owner of the NBA’s Sacramento Kings. He will moderate the discussion after the screening of the movie Gilbert, about Gilbert Gottfried, which highlights the everyday life of the highly influential and incomparable comedian.

A short movie, Lifeline, and a 13th feature-length film will be included in the schedule this year, instead of panel discussions. The Phantom of the Open tells the remarkable true story of Maurice Flitcroft, a crane operator and optimistic dreamer who, with the support of his family and friends, managed to gain entry to the 1976 British Open qualifier despite never playing a round of golf before.

Passes to see all 13 films cost $200, including all processing fees. Four passes purchased together are $700. Also available are a small number of University of Illinois student passes priced at $150 each. Passes and individual movie tickets–$20 for the general public or $15 for U of I students—may be purchased through the festival website or at the Virginia Theatre box office, 203 W. Park Ave., Champaign, 217-356-9063. Updates will be posted on the festival website.

Roger Ebert’s Film Festival is a special event of Chaz Ebert and the College of Media at the University of Illinois Urbana-Champaign. For additional information, visit http://www.ebertfest.com.