Film and television producer Feder to speak at 2022 Media Convocation

Stephen Feder (BS ’02, media studies) believes that with a little persistence and dedication to the things they love to learn about, students can accomplish anything.

“I think if people can harness that, there’s no telling how far they can go,” he said.

Feder, a film and television producer at T-Street Productions, will be this year’s alumni speaker for the College of Media Convocation. Because previous ceremonies had been postponed due to the pandemic, the May 2022 convocation will honor graduates from Fall 2019 through Spring 2022.

Looking back at his time at the University of Illinois, Feder said he learned a lot about himself both personally and professionally. 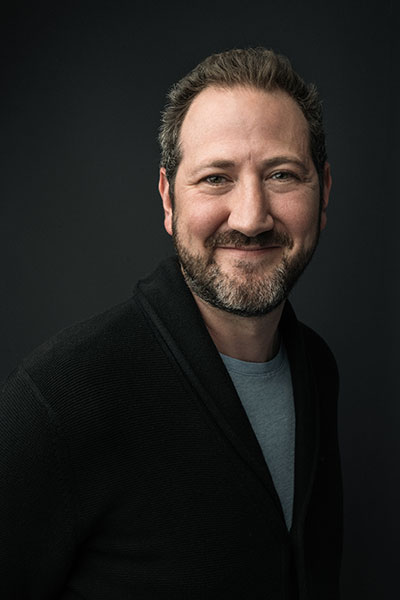 “Illinois gave me such incredible opportunities, not just inside the classroom, but outside the classroom,” he said. “That helped shape me as a human and taught me a lot about what my limitations were and the things that I needed to work on.”

He is driven by the people who have helped him get to where he is, especially past professors at the College of Media.

“I think it’s really important to pay homage to how you got somewhere. Understand that it’s because of your own drive, but also because people are willing to help you,” Feder said.

Feder’s love of movies was “cultivated at [the College of Media] just by proximity to the idea of Roger Ebert.” When he was a student, Feder met Ebert, a Pulitzer Prize-winning film critic and Illinois journalism alum who created Roger Ebert’s Film Festival, known as “Ebertfest.” During Ebertfest, Feder had the chance to have lunch with Ebert.

“Our conversation and just his presence, interest, and care in us as students gave us a boost in confidence that our goals were well within our reach,” Feder said. “He probably never understood the impact he had on all of us—but his passion for movies, his intellect, and his success always was a driving force of motivation for me. I miss him.”

About a decade later, Feder’s documentary Kumaré was screened at Ebertfest 2013. Feder was executive producer for the film, featuring a man who impersonates an Indian guru and builds a following. “Kumare seems to establish that a guru can be a complete fraud and nevertheless do a certain amount of good,” Ebert wrote, “because what matters is not the sincerity of the guru but that of his followers.”

Feder said it was a full-circle moment and meant everything to him.

“The fact that he selected it to be part of Ebertfest among the last group of movies he handpicked before passing away is an honor I’ll never forget,” Feder said.

It was his work on Kumaré, which received a SXSW Audience Award, that led to Feder’s time at Annapurna Studios. As senior vice president of production and development, Feder worked on films such as Everybody Wants Some!!, which was also an Ebertfest selection, as well as Where’d You Go, Bernadette, both directed by Richard Linklater; Spring Breakers, directed by Harmony Korine; and The Grandmaster, directed by Wong Kar-Wai.

“I had always been inclined to want to tell stories that had a broad reach,” Feder said. Growing up, he was inspired by movies like Back to the Future, Raiders of the Lost Ark, and Star Wars—movies that he shares with his kids.

Feder eventually got the chance to work on Star Wars, describing the feeling of walking onto set “a life-affirming moment.”

“It was a reminder of the power of one’s imagination—and how if you could dream it, you could make it a reality,” he said. “I never wanted to hear the word ‘cut’ and still don’t.”

He became vice president of film development at Lucasfilm in 2016, working on Solo: A Star Wars Story and other projects. He served as the Lucasfilm production executive on location/set for filming, and was a member of the Lucasfilm Story Group, which keeps track of the Star Wars canon to assist writers and directors in the development of new stories.

Feder is currently a producer at Rian Johnson and Ram Bergman’s T-Street Productions, responsible for the film Knives Out. He works with his producing partner, Kiri Hart, to help amplify artistic voices.

Feder said the professional relationships that have helped him throughout his career inspires him to pay it forward to the next generation of filmmakers. He has been a panelist at the college’s Media Career Nights to share advice on working in the entertainment industry.

“I’m only here by the grace of other people believing [in me] and I also have to be willing to do the same for others,” he said.

Above all, he recognizes that the industry and the world is forever changed because of the COVID-19 pandemic.

As streaming makes content more accessible, Feder considered the next challenge that the media industry needs to address.

“We as filmmakers have to be malleable; we can’t firmly entrench ourselves in the past,” Feder said. “We have to think about how we're going to reach a future generation of moviegoers, and TV goers, and content consumers. It’s our responsibility to innovate ways both to tell stories and also to make them feel new.”

Feder also hopes he can provide some comfort to Media students who are feeling unsure about their futures.

“If you have been able to get through what you’ve done the last few years and come out of it, I think that there’s a lot of promise ahead,” Feder said.

Challenges can be seen as opportunities, he said.

“I understand the world is really scary at the moment and challenging, but it needs us. It needs us to make changes,” Feder said.

“So we can’t retreat. We have to push forward.”