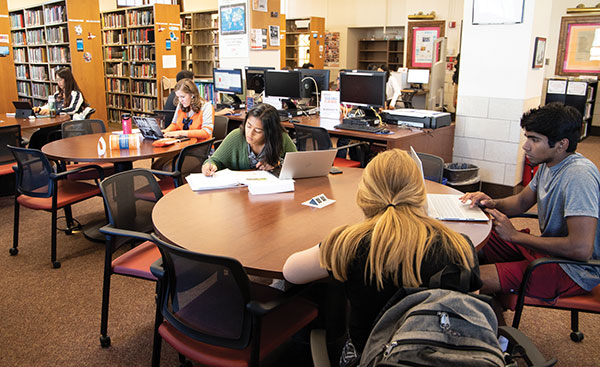 Tucked in the northwest corner of Gregory Hall, the Communications Library is not only a resource for thousands of students but a comfortable sanctuary. Over the years, the library has transformed to accommodate student needs, expanded its hours, and renovated its top floor.

Now, thanks to the generosity of its donors, it’s one of the most popular libraries on campus, according to Lisa Romero, who has been head of the Communications Library for more than 20 years.

Originally named the Journalism Library, it has been in room 122 Gregory Hall since 1940. Being located inside an academic building is a plus for students, making it a convenient go-to spot for many students in the College of Media, although it’s officially a unit of the University Library.

“I use the library almost every night before I have an assignment due or need to meet with my advertising friends,” said Carly Kwiecinski, junior in advertising.

Romero has seen the library change over the years, including a few renovations and the addition of the international news lounge in the basement. This lounge, complete with 24-hour coverage from news sources around the globe, has helped make the library more than just a place to study; it’s a timely resource for journalism and communication students on campus.

The library has been a part of students’ education for years—including in the 1970s for Marla and Steve Krause (BS ’73, journalism, and BS ’72, accounting, respectively). The Illinois alumni made a gift to the Communications Library in 2015 for renovations, which helped make it more accessible and more comfortable.

“Over the years, my husband and I would come down for football games and we would bring our children with us. We took them into the library one day, and it just looked really sad,” Marla Krause said. “I thought it pretty much looked the way it did when I went to school there, and so we started thinking about what we could do.”

Thanks to their gift, the library was able to get new carpeting and furniture, ushering in a more modern feel.

“The sound quality was not conducive to studying or library work, and students didn’t have access to enough outlets,” Romero said. With outlets on each table, comfortable chairs, and carpeting, the library has been better able to serve the needs of so many more students.

“The Communications Library has always made its collections and services a priority,” Romero said. “Thanks to the generous donation by the Krauses, we have now been able to make our space a priority for the students, an enhancement that impacts them on a daily basis.”

Added Krause: “You want students to feel like somebody cares about them. They should know that somebody cares that they have an inviting, comfortable space to want to do work and hang out.”

Since the renovation, the library has continued to be a hot spot for many students, whether it’s used to study, to meet for a group project, or to hold meetings for student organizations such as the American Advertising Federation. The library also holds journalism coaching and study nights for certain classes.

For many, it’s a place that holds great memories of their time here at Illinois.

“I’ve gone to the Communications Library almost every week for four years between classes,” said Lindsey Lee, before graduating with a bachelor’s in communication last spring. “It’s been nice to have it right there, and it’s definitely a place I’ll miss when I leave campus.”

“The Krauses have made a direct and positive impact on students,” Romero said. “We still get comments from students saying, ‘This library is so cozy. I love hanging out in the Communications Library.’”