Peruvian visual journalist Elio Leturia (MS ’92, journalism) published the bilingual book Aguijón 30 Años | Aguijón 30 Years (ISBN: 978-1-7923-1695-1) that displays in 146 pages, in Spanish and English, the history of Aguijón Theater, the oldest Latino theater company in Chicago. It documents in eight chapters and in more than 300 photographs the trajectory of what began as an itinerant group, first housed at Truman College, to the establishment of its own venue in 1999 to the participation in international theater festivals followed by the promotion of new theatrical texts through the creation of the Chicago International Hispanic Playwriting Prize that began in 2014.

The book was written and edited by Leturia with Mexican writers Andrea Ojeda and Marcopolo Soto as coeditors. Leturia also designed the entire book and its cover was highlighted on the American Institute of Graphic Arts AIGA website. The book features an introduction by Goodman Theatre’s Resident Artistic Associate Henry Godínez, and the congratulations of Mario Vargas Llosa, winner of the 2010 Nobel Prize in Literature, as well as 14 testimonials from playwrights and theater scholars from Colombia, Uruguay, Cuba, Dominican Republic, Spain, Peru, Mexico, and the United States.

This illustrated book also includes reflections on García Lorca’s theater narrative, the company’s educational role through the After School Matters program, the creative approach to Aguijón’s set design process, among others.

Currently, Leturia is an associate professor at the Communication Department of Columbia College Chicago where he teaches multimedia journalism and graphic design and board member of the Chicago Chapter of the Fulbright Association. 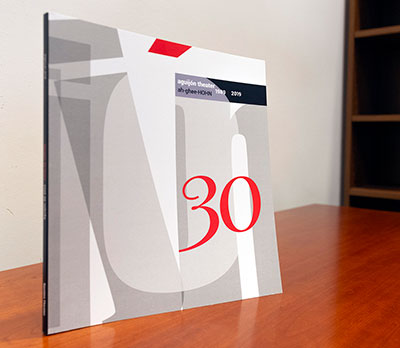