Get to know some of our College of Media students! Zeke Allis is a Class of 2023 media and cinema studies major.

Where do you hope your career goes after graduating from UIUC?
The end goal is to get into film production. I have been interested in films as a child and have also been interested in video production my whole life. Being able to produce a piece that you can put into the world and see how people react to it is a cool experience. I am specifically interested in the horror genre. Having people go into something that might make them uncomfortable; it’s interesting to see what makes them tick. I want to create things that get a reaction out of people and there’s not a more primal, visceral audience reaction than to horror.

What class have you found most beneficial to you?
There is one really cool class that has been my favorite since I got here, MACS 282: World of Blood and Death, taught by Jonathan Knipp, a lecturer in the Department of Media & Cinema Studies. It’s a horror movie class, where we got to watch a lot of cool horror movie films. It was one of the few classes where students continue to talk about it after class. It was also amazing to have a teacher that was so passionate about the subject.

What is your film inspiration?
One of my favorite directors is Akira Kurosawa, who is very well known throughout the film industry. He does a lot of cool samurai films and contemporary pieces for his time. What I really appreciate about his films is that they are very artistic but also very entertaining. There is a lot to enjoy for all audiences. My favorite of his was Seven Samurai, which feels like all aspects of cinema are apparent in that film.

What were some of your experiences as an Ebert Fellow in 2021-22?
As an Ebert Fellow, we got to work with our mentor, Chicago Tribune film critic Michael Phillips, and hone our skills in critique—not only of film, but critique of any art. We learned written and video forms. We eventually went out to film festivals and put our knowledge to use. The coolest part of the experience was being able to go see a film that may have only been seen a few times, go in blind, and share your unbiased opinion of the film. The highlight was going to True/False Film Fest. They show a lot of documentaries, and there was such a variety in that genre alone. It was amazing to see directors just walking down the street. 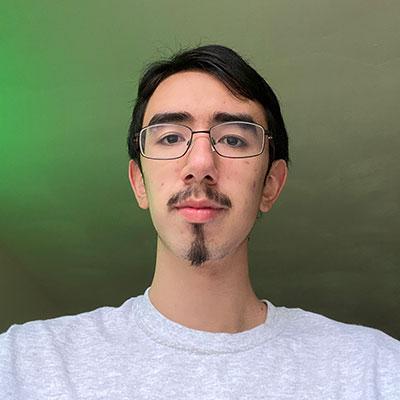