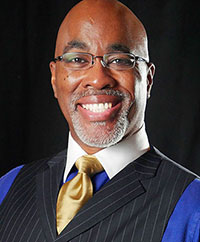 Chambers’ research background and course offerings are all historically based. He currently teaches a section of an advertising history course, as well as a course on the foundations of advertising. He also has crafted a course that examines the use of race and ethnicity in advertising.

Chambers has presented his research into the African-American consumer market both nationally and internationally. His work has been published in books and journals in the United States, Asia and Europe. He has been invited to speak to gatherings of practitioners and academics throughout the United States, Canada and Asia. He also has appeared on The History Channel discussing advertising issues, and his opinions have been sought by a variety of periodicals including Forbes and Black Enterprise magazines. Chambers also has served as a consultant on advertising history programs appearing on the BBC. In addition, he has consulted with national nonprofit organizations and Fortune 100 companies, as well as advertising agencies on matters of diversity, stereotyping and various consumer issues.

The University of Pennsylvania Press published his first book, “Madison Avenue and the Color Line: African Americans in the Advertising Industry,” in early 2008. This penetrating work examines the employment and entrepreneurial experiences of blacks in the advertising industry and their fight to diversify both the industry and advertisements.