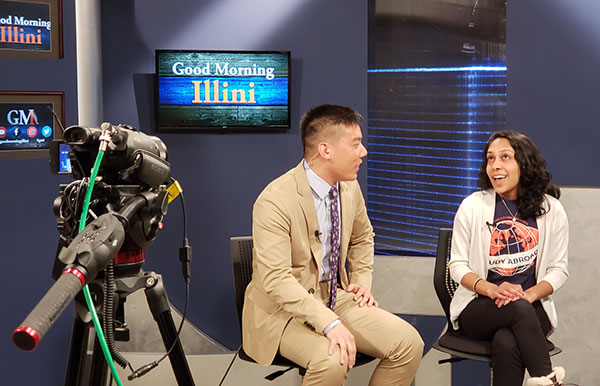 UI7, the University of Illinois cable channel, features a wide variety of programs including weekly, live, 30-minute television and radio broadcasts that are produced, directed, and written by broadcast journalism students at Illinois. It currently airs during the academic year, on Comcast Cable TV in Champaign-Urbana, Danville, and several other communities in central Illinois. The broadcasts originate from the Richmond Journalism Teaching Studio on the U of I campus. The Richmond Studio was funded by Jack C. and Marjorie Laird Richmond of Champaign, in honor of his parents, Arthur Dean and Mildred Hummel Richmond.

University of Illinois broadcast journalism students have been producing and airing weekly or biweekly television newscasts since the 1950s. Until the middle 1970s, student news programming aired on WILL-TV (PBS). With the arrival of cable television in Champaign-Urbana, student broadcasts started airing on various cable access and government channels in CU. Starting 1997, student newscasts have aired on UI7, the University's cable TV channel. In 2014 and again in 2016, the UI7 newscast won a Crystal Pillar Award for the best collegiate newscast in the Mid-America NATAS region.

If you have questions or comments about the website, news stories, or journalism classes, or a tip about a news story, please email faculty member Ken Erdey at kerdey@illinois.edu.

Support for UI7 News is provided by the University of Illinois College of Media, the Department of Journalism, and WILL-TV.

The Richmond Studio is located at 1110 W. Main, Urbana, northeast corner of Main and Goodwin.