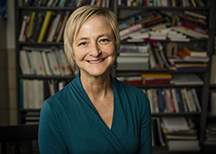 Nelson has taught a variety of small and large-lecture courses at the undergraduate and graduate levels.

Nelson studies and teaches advertising and consumer research. She has published nearly 70 peer-reviewed articles and book chapters. She is associate editor of the International Journal of Advertising. She has worked, researched, or taught in the United Kingdom, Denmark, Austria, United States, and Jamaica.

Nelson’s early research examined individual differences with respect to persuasion and consumer behavior (e.g., gender, culture). However, she is probably best known for her research on brands in entertainment (e.g., games, movies). While investigating the prevalence and response to branded messages, Nelson became interested in consumers’ media literacy or persuasion knowledge about these so-called hidden brand techniques. As a result, Nelson’s current research and public engagement endeavors focus on advertising/media literacy. For example, Nelson is pursuing longitudinal ethnographic work with parents and pre-school children to understand the development of consumer literacy. At the same time, Nelson is interested in assessing advertising/consumer literacy among adults and understanding how literacy influences the persuasion process and marketplace behaviors. She is currently involved in an international research project (funded by NIH) related to culture, health, and advertising in Jamaica.

In addition, Nelson has a continued research interest and fascination with new technology, branding, and media. She is pursuing research with a team of students and faculty related to virtual reality mediated experiences.

Making Media for a Healthier U