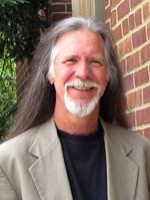 Peter S. Sheldon started his creative career as a copywriter in Chicago and ended up as a creative director in Richmond, Virginia. Most of the agencies he worked at along the way no longer exist, although he insists that this is not entirely his fault. His creative work has been recognized by the Clio Awards, The One Show, Communication Arts magazine, and both the Chicago and Richmond Addys.

Currently, Sheldon teaches introductory and advanced courses in creativity in advertising at the University of Illinois at Urbana-Champaign. In 2014, he was named winner of the Association for Education in Journalism and Mass Communications Advertising Division’s Distinguished Teaching Award. He has been awarded the University of Illinois Campus Award for Excellence in Undergraduate Education in 2003 and 2010. He has also received the Department of Advertising Excellence in Teaching award for 2005-2006, 2007-2008, 2009-2010 and 2010-2011.

Many mock his hair although it is clearly out of jealousy.