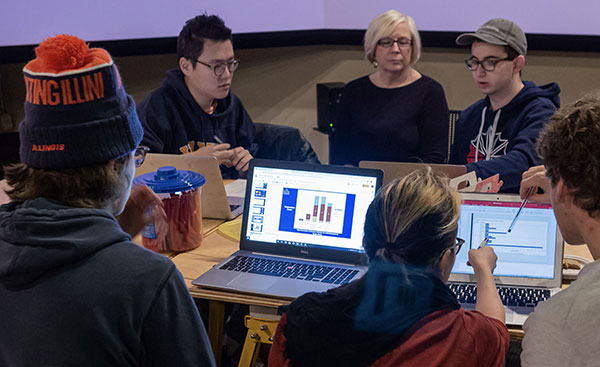 Update 8/11/2021: The first deployment of laptops and Internet hotspots were given to families in the Georgetown-Ridge Farm school district. Learn more.

The Community Data Clinic, a mixed methods data studies and interdisciplinary community research lab led by Anita Say Chan, associate professor in the Department of Media & Cinema Studies and at the iSchool, has received a $50,000 grant to address gaps in household access to computing devices, hotspot connectivity, and digital literacy skills in East Central Illinois. The grant is part of the state's Broadband Regional Engagement for Adoption and Digital Equity (READY) program, which is operated through the governor's office and Illinois Department of Commerce and Economic Opportunity. The Community Data Clinic at the University of Illinois is one of only four sites that are partnering with the state on this effort.

"Our award centers UIUC's leadership in helping the state to expand civic infrastructures and ensure equity in access for Illinois' diverse populations," said Chan, who is a principal investigator on the grant along with Tracy Smith, director of research IT and innovation at Illinois.

According to the researchers, data from the United Way show that from 2007 to 2017, the cost of a basic family survival budget grew by 38%, "driven largely by increases in the costs of housing, health care, and childcare, but also by the addition of basic smartphone plans and internet connections to budgets." The COVID-19 pandemic put an additional strain on these already vulnerable households.

Over the next year, the clinic will collaborate with the Champaign County Housing Authority and Project Success of Vermillion County, an after-school program that partners with nearly 20 schools in the county. Kimberly David, associate director of Project Success, notes that the lack of available resources in households—including access to laptops and reliable, affordable internet connection—heavily influenced students' absenteeism during quarantine, and that the impact could remain even after COVID subsides.

"Working together, we aim to elevate and expand best practices and approaches to engage local stakeholders toward shared goals in broadband access, adoption, and healthy practices in utilization," said Chan. According to Chan, next steps include a deployment of 200 laptops for low-income households in early August, in partnership with local community groups.

In addition to directing the Community Data Clinic at the National Center for Supercomputing Applications, Chan co-leads the Just Infrastructures Initiative with faculty in the Grainger College of Engineering. She is a Fiddler Innovation Faculty Fellow at the NCSA and a 2020-2021 Faculty Affiliate at the Data & Society Research Institute in New York City. She received her PhD from MIT in the history and anthropology of science and technology studies.