In 1972, seven black reporters from The Washington Post metropolitan desk took a stand for equality in the newsroom—becoming the first to challenge a major U.S. newspaper on its hiring practices—and filed a formal complaint with the Equal Employment Opportunity Commission.

Known as the Metro Seven, they pioneered a path for others to advocate for equal treatment in hiring, promotion, and compensation practices. One of the Metro Seven journalists later became a Pulitzer Prize and Emmy Award winner, and an esteemed faculty member at the University of Illinois: Swanlund Chair Professor of Journalism Leon DeCosta Dash, who is also a professor with the Center for Advanced Study, Department of African American Studies, College of Law, and a research program professor with the Center of African Studies.

On August 9, the Metro Seven members were inducted into the National Association of Black Journalists (NABJ) Hall of Fame; Dash is also one of the founders of NABJ.

“It is truly an honor to be inducted into the National Association of Black Journalists’ Hall of Fame with the other members of the Metro Seven,” Dash said. The other members include Ivan C. Brandon, LaBarbara A. Bowman, Penny Mickelbury, Ronald A. Taylor, Richard Prince, and the late Michael B. Hodge, who died in 2017. 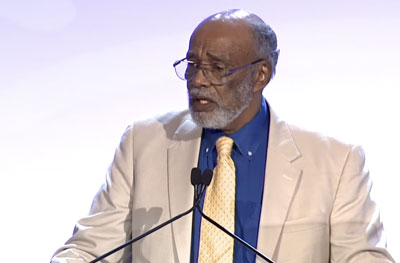 Dash spoke on behalf of the Metro Seven at the Hall of Fame ceremony, which was emceed by actress, producer, and political activist Alfre Woodard, and anchor of the TODAY Show on NBC News Craig Melvin.

“We’d like you to reflect on what progress has been made in the 47 years since,” Dash told the audience, “and what is left yet to be done.”

He quoted from the Metro Seven’s statement at a press conference they held on March 23, 1972, at the historic Metropolitan AME Church:

“Today, we seven black reporters for The Washington Post filed a complaint with the U.S. Equal Employment Opportunity Commission, charging The Washington Post with denying black employees an equal opportunity with respect to job assignments, promotional opportunities, including promotions to management positions and other terms and conditions of employment. These and other practices have operated to substantially exclude black employees from supervisory and higher paying positions and those assignments which would enhance their professional growth and progression.”

In November 1972, after a seven-month investigation, the EEOC issued a report that stated, in part, “there is reasonable cause to believe that The Post has engaged in unlawful employment practices as charged by the seven black reporters.” The seven black reporters and the EEOC sought to negotiate an agreement with The Post, but the Post management declined, arguing that there were factual errors in the EEOC report. The EEOC’s commissioners voted against suing The Post in federal court, but gave the seven black reporters that right. The reporters had been represented for months pro bono (without fee) up to that stage by attorney Clifford Alexander, then of the prestigious law firm Arnold and Porter. Alexander made it clear that the reporters would have to pay the legal fees of any court action. Collectively, the seven reporters did not have the money to seek a solution in court, but their public challenge to The Post had the sought-after impact.

“After the public report was issued, the Post embarked on a program of hiring and promotion of journalists of color throughout the newsroom,” Dash said.

Closing his remarks, Dash said fellow Metro Seven member LaBarbara "Bobbi" Bowman wanted to remind people about the importance of diversity in accuracy—“which is the core of what we do as journalists.”

Watch the Metro Seven’s induction into the NABJ Hall of Fame on YouTube: https://youtu.be/mTCKHelVt8o?t=6495