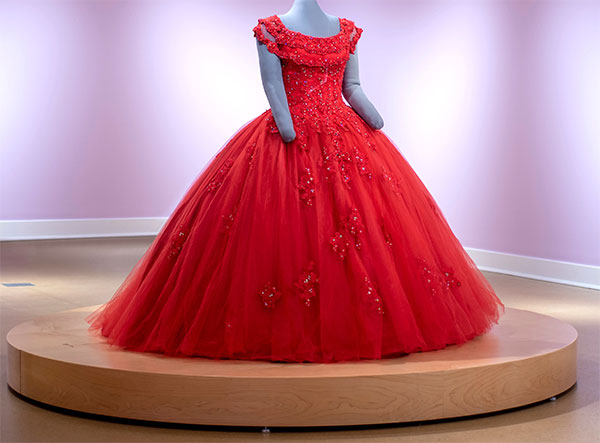 Following a Fall 2020 doctoral seminar on intersectional Latina feminist media issues at the Institute of Communications Research, Angharad Valdivia, a research professor who is also a professor of Latina and Latino studies, and her students were inspired to create a museum exhibit on quinceañeras. The team of Valdivia, ICR doctoral students Ariana Cano and Stephanie Pérez, and ICR alumna Dora Valkanova (PhD ’20) developed “Quinceañeras: Celebration, Joy, and Ethnic Pride.”

The new exhibit at Spurlock Museum opens on Saturday, Sept. 24, and runs through Sunday, Dec. 4.

The group drew inspiration from Quinceañera Style: Social Belonging and Latinx Consumer Identities, a book by Rachel Valentina Gonzalez, but amongst their studies surrounding “quinces,” which included extensive research on matters of labor and consumerism, they noticed one thing was missing: joy.

“I feel like I’ve really tried to bring some realities about what a quince is. Sometimes it’s not always joyful,” Cano said. “[We wanted to show] the process it takes to get to the quinceañera.”

The exhibit will focus on the joy of the traditional celebrations that mainstream media oftentimes does not capture and will contextualize popular culture representations of this important coming-of-age event for Latinx/es and Latin Americans. Video reels, original dresses, photographs, and decorations will be featured in the exhibit to provide visitors with the experience and feel of an actual quinceañera.

“Consumerism of Latinidad is always tied to stereotypical things. When you really dig deep into what a quinceañera is, it's symbolic sometimes, it’s a process other times. To some people, it’s an actual event and to some, it’s about the quinceañera herself,” Cano said.

Since Summer 2021, the group has been collecting, approving, and installing artifacts in the exhibit.

Cano and Pérez also developed a zine, a self-published form of a magazine, and Cano produced a website as ways to engage with visitors beyond the exhibit. Valkanova produced two videos that can be viewed at the exhibit: one is a compilation of quinceañeras on mainstream media and the other features actual quinceañeras.

“It’s a project about joy. One of my favorite things as a professor and as a scholar is mentoring my doctoral students,” Valdivia said. “It has been a joy because I can see the future of my field. I can see the next generation of professors and it makes me very happy to see their energy, creativity, and commitment to social justice.”

The exhibit has also united the Latinx community in Champaign-Urbana as it features photos and artifacts from community members, including a donated dress.

“It celebrates a local community. We have a lot of artifacts and photographs from Champaign-Urbana,” Valdivia said. “The Spurlock Museum is very interested in connecting with the local community. Not just for the University, but to make its exhibit appeal to a broad range within the area.”

They also hope the exhibit appeals to a broad range of students.

The exhibit opens on Saturday, Sept. 24, 4–6 p.m., and will feature remarks by Michael DeAnda, College of Computing and Digital Media, DePaul University, and Rachel Gonzalez-Martin, Department of Mexican American & Latina/o Studies, University of Texas at Austin.