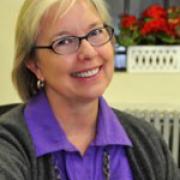 Benson has won awards for her teaching and her reporting. She is a former morning drive anchor and reporter at WMAQ Radio in Chicago. She was a Benton Fellow at the University of Chicago and a Knight International Press Fellow in Eastern Europe. During her more than 30-year career in broadcast journalism at various television and radio stations across the Midwest, Benson has won numerous awards for reporting, including being nominated for a DuPont Columbia award. She is formerly a public affairs consultant with the United Nations World Food Program, Rome. She is listed in Who’s Who in the Midwest.

Since 1998, Benson has done annual journalism training workshops throughout Eastern Europe and Southeast Asia, including workshops for journalism faculty. She has worked with radio stations in Slovakia, Hungary, Romania, Czech Republic and Bosnia-Herzegovina to develop station identity and news product.