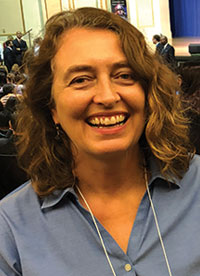 Alison Davis has been producing national documentaries for over two decades. Her programs have received numerous awards including seven regional Emmy Awards and over 20 Emmy nominations.

Davis produced documentaries for the Big Ten Network when she joined Illinois’ Division of Intercollegiate Athletics / Public Affairs in April of 2008. Before that she worked at WILL-TV (PBS) where she was the longtime producer and host of Prairie Fire, a cultural magazine series about the people and places of central Illinois.

Davis won a 2019 National Academy of Television Arts and Sciences Mid-America Emmy award for Illinois Artists: Endalyn Taylor, produced for the Big Ten Network. She won a 2017 Mid-America Emmy award for writing The Game Changer, the story of disability rights pioneer Tim Nugent. In 2015 she won an Emmy for writing the documentary Carlos Montezuma: Changing Is not Vanishing. She was awarded her first regional Emmy in 1999 for her documentary, Walter Burley Griffin: In His Own Right about the talented, but overlooked Illinois architect.

Her documentary Against the Wind, the story of wheelchair athlete Jean Driscoll’s attempt to become the first athlete to win seven consecutive Boston Marathons, was named best Television Documentary in 1997 by American Women in Radio and Television. She was one of 20 producers selected to attend the 2001 WGBH Boston Producers Workshop, where she participated in extensive hands-on training with some of television’s most experienced content creators.

Davis's other productions include the nationally distributed Lincoln: Prelude to the Presidency and Gold Star Mothers: Pilgrimage of Remembrance. She was also nominated for an Emmy for writing Ten Sisters: A True Story.