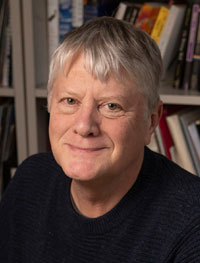 Professor Brant Houston holds the John S. and James L. Knight Foundation Chair in Investigative and Enterprise Reporting at the University of Illinois. Houston teaches investigative and advanced reporting in the Department of Journalism in the College of Media at Illinois.

He also oversees the online newsroom at Illinois, CU-CitizenAccess.org, which serves as a lab for digital innovation and data journalism.

Houston became the chair in 2007 after serving for more than a decade as the executive director of Investigative Reporters and Editors (IRE), a 5,000-member organization, and as a professor at the University of Missouri School of Journalism. Before joining IRE, he was an award-winning investigative reporter at daily newspapers for 17 years.

Houston is the author of five editions of the textbook, “Computer-Assisted Reporting: A Practical Guide,” and co-author of the fourth, fifth and sixth editions of “The Investigative Reporter’s Handbook.” He co-founded the Global Investigative Journalism Network in 2003 and serves as chair of its board of directors. He has taught and spoken about investigative and computer-assisted reporting at newsrooms and universities in 25 countries.

Currently he is working on projects involving nonprofit journalism newsrooms, digital tools for news-gathering, and new business models for journalism.

In 2022, Houston helped preserve the investigative news content of the website FairWarning.org with the University of Illinois Archives.