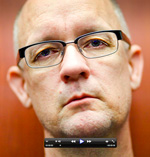 Recipient of the 2020 Illinois Student Government Teaching Excellence Award and named the 2014 Associated Press Media Editors Innovator of the Year for College Students, Stretch Ledford has worked as a journalist telling stories through audio, photographs and video in more than 55 countries. His career began as a staff photojournalist for The State (Columbia, SC), The Fayetteville (NC) Observer, The Durham (NC) Morning Herald, The St. Petersburg (FL) Times (now the Tampa Bay Times) and The Commission, the journal of the Southern Baptist Foreign Mission Board.

Since joining the Illinois faculty in 2011, Ledford's work has been featured online and/or broadcast by major news organizations around the world, including NPR’s Morning Edition, NBC's Nightly News with Brian Williams, the Today show, Time, the Huffington Post, The Weather Channel, the BBC, The Atlantic, Esquire, the Wall Street Journal, the Globe and Mail (Toronto), the Guardian (London), the Nippon Television Network (Japan), Gawker, Vice and Forbes.

We fragile humans are more prone to label one another, to place one another into groups and to revert to the insularity of our various tribes than we are to recognize our innate commonalities. Doing so is easy, risk free and readily dismissed as “just human nature.”
But there also exists a deeper human nature that longs for recognition by and connection with the phenomenological Other. If there’s any single motivating factor behind my work it is my desire for it to provide a pathway for that deeper Self to recognize the connectedness it shares with the Other. Psychologists would call this “catalyzing humanistic empathy;” for journalists, it’s “promoting civil discourse.”

Since I began making photographs as a journalist in 1983, my cameras have taken me to more than 50 countries – places with exotic sounding names like Ouagadougou and as isolated geographically as the Sangihe Islands in the western Pacific. I have photographed Ronald Reagan in the Oval Office, Mother Teresa in an earthquake zone and both Bill and Hillary Clinton (and Donald Trump) on the campaign trail. I have photographed people on the verge of starvation, several women giving birth and any number of weddings.  I have been detained by police or military units in three countries as I worked to make photographs that would get below surface appearances and tell meaningful stories.

Throughout, my goal is to find, capture and produce stories that foster the shared sense of community that I believe defines our deepest human nature.