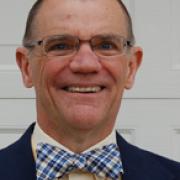 Martin served as Journalism Department Head from March 2011 till August 2016 and as Director of Journalism Graduate Studies 2008-11. He has 32 years of journalism experience, including 29 as a reporter and editor at The Roanoke Times in Virginia. He was managing editor of the Times from 1997 until 2004. He edited projects that were finalists three times for Pulitzer Prizes. He also supervised work that won a George Polk Award, a National Headliners Award, Southern Journalism awards and numerous state awards for reporting and writing. In the 1990s, the newspaper won the public service award given by the Virginia Press Association five times, far more than any other newspaper.

Martin organized and participated in four Knight-Illinois Investigative Reporting Workshops for journalists from small and medium-sized papers around Illinois. In the summer of 2006, he lectured and taught journalism courses in Dhaka, Bangladesh. He is co-founderof the CU-Citizen Access project, which reports on economic and social issues in Champaign County.

Martin’s book, “Living Journalism: Principles and Practices for an Essential Profession,” was published in August 2011 by Holcomb Hathaway, Publishers.