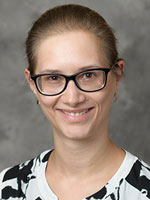 Jenny Oyallon-Koloski is an assistant professor of Media and Cinema Studies at the University of Illinois at Urbana–Champaign and a Certified Movement Analyst in Laban/Bartenieff Movement Studies. Her written and videographic research on dance and film form in the musical genre has been published in Studies in French Cinema, Post Script, and [in]Transition: The Journal of Videographic Film and Moving Image Studies. She serves as the movement analysis specialist for the Media Ecology Project (Mark Williams and John P. Bell, PIs, Dartmouth College) and is a faculty affiliate of the Eye Tracking / Physiology Lab in the College of Media at the University of Illinois. Her current book project argues for the storytelling power of figure movement and dance in musical cinema. She is also the director of the movement visualization (mv) lab and co-creator, in collaboration with Michael Junokas, of the mv tool, an embodied motion-capture research environment to study the manifestations of human movement in cinematic space.