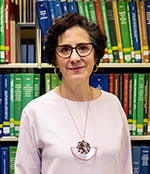 Professor Valdivia served as the Inaugural Head of the Media and Cinema Studies Department. As well, she served as the Interim Director of the Institute of Communications Research for five years, 2009-2014. Within communications research, Valdivia combines the areas of gender studies with ethnic studies and Latin American studies. She brings these together in the examination of contemporary mainstream popular culture in an approach that explores the tension between agency and structure within a transnational setting. She has conducted field research in Nicaragua, Peru and Chile. Current research projects include hybridity theory as it applies to Latina/o Studies, ambiguity as a strategy of ethnic representation and differentiation within Latinidad, and transnationalism as it applies to the discipline of Latina/o Studies. She has been a visiting scholar at the University of California at San Diego, Cambridge University-Lucy Cavendish College (UK), York University in Toronto, St. Louis University in Madrid, Universidad the Chile; Universidad del Norte, Barranquilla, Colombia; and Universidad Jaume 1, Castellon Spain. She is working on two book-length manuscripts titled, The Gender of Latinidad (Blackwell) and Latina/os and the Media (Polity), as well as on several other projects. Additionally she is the managing editor of the Encyclopedia of Media Studies (Blackwell), an eight-volume project designed to map out the field. Valdivia has lectured broadly on her areas of research and is a dedicated mentor to graduate students and junior faculty of color. Valdivia is an affiliate faculty member in the Women and Gender in a Global Perspective Program and the Center for Latin American and Caribbean Studies.