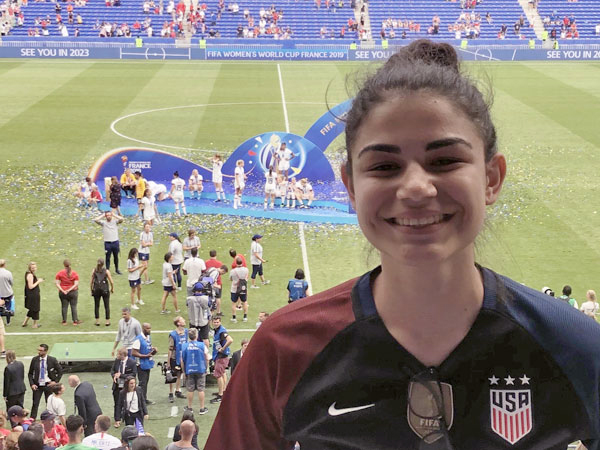 For the first time in FIFA Women’s World Cup history, each city had its own public fan movement.

FIFA sent out a blast on Twitter looking for the perfect fan to follow the teams around Europe and capture what it’s like to be in the stands.

College of Media junior Soula Motamed saw FIFA’s tweet and thought, why not? As a self-proclaimed women’s soccer expert, Motamed was going to Paris to catch a bit of the World Cup anyway.

“I was like ‘Wow, this sounds really cool,’” Motamed said.

The journalism student filled out the application with a preference for covering women because they are the reason she loves the game. FIFA contacted Motamed and asked her to be part of the fan movement.

“The fan movement is basically just bringing fans together from different parts of the world and spreading the love of football, especially through social media channels,” Motamed said.

Each of the host cities had its own fan experience. Fans from around the world could celebrate with the French football fans and supporters could bask in the FIFA World Cup atmosphere from anywhere in the world via Twitter and FIFA’s exclusive fan website.

Motamed’s duties were to stick with the American team. She hadn’t planned on staying for the whole tournament but as the Americans continued to advance and eventually became the champions, her stay lengthened.

For the most part, the reporting that Motamed did was via phone when she posted to FIFA’s Twitter or Instagram takeover for the larger games.

She got to experience immersion journalism as she went to the games decked out in fan gear, sat with the fans, and took video of fan reactions throughout the game.

“It wasn’t really about content from what happened in the game,” Motamed said. “It was about how fans reacted to it.”

Though no individual fan experience stood out to her, she was able to make a clear distinction between American sport and European.

“There’s something about a World Cup,” Motamed said. “People coming together from every country, every corner of the world coming together, win or lose, to celebrate this amazing event.”

Although she attended the U.S. Championship game, Motamed would not describe that as the most exciting game of her two-month stay in Paris.

“When [the U.S.] played France, it was obviously in Paris, in the biggest stadium in France with 70% French supporters,” Motamed said. At the time of this quarterfinal game, the U.S. was No.1 and France was No. 2.

“It was basically the biggest game in women’s soccer history,” Motamed said. “In journalism, you’re supposed to be very unbiased but since I was a fan, I was in there rooting for the U.S.”

The only way to describe the crowds and the atmosphere was “crazy,” she said.

Almost none of the people on Motamed’s FIFA team were American, or even spoke English as their first language.

“I met people from all over the world that I am going to bond with forever,” she said. “I really loved what I did this summer. I met so many different people, not only from the journalism sector, but agents, front office people, and that really got me intrigued.”

In the classroom, Motamed had always been a good student but not very outspoken. Leaving her comfort zone helped her come out of her shell.

“I guess it’s true about how I have been kind of timid sometimes when it comes to talking to people,” Motamed admitted. “This really helped me open up, expand my horizons, and it made me a better journalist.”

Although she doesn’t quite know what she wants to do in the future, she knows that picking sports was a great start. Working with FIFA showed her the possibilities are endless when there is a love for the game.

“Being in a different place, but unified by sport, was just amazing,” Motamed said.