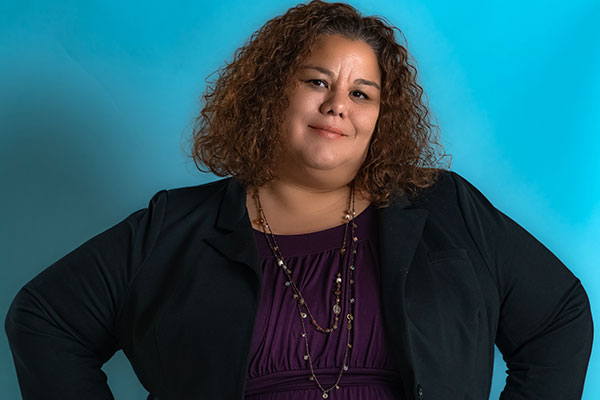 Angela Aguayo, a new associate professor in the Department of Media & Cinema Studies, begins her work by looking for answers to two questions: Which problems are not being solved right now, and what are the world’s most pressing social issues? Many of her projects, including the oral history project Rural Civil Rights Project and the summer camp Girls Make Movies, were prompted by this approach.

Her research is centered around documentary production and media studies, and her work “creates connections between production, theory, and history.”

This work, she said, began as a PhD student at the University of Texas, where she studied social movements in the media. Aguayo recalled the protests and political actions that were “unleashed” during the election of former President George Bush, as well as the beginning of the Iraq War.

“I was just fascinated with the expression of ideas happening in streets when people don't feel they have access to the political process,” she said. “So I started to read about that in my courses, and there was a disconnect between what I was experiencing and watching, and how scholars were writing about it. Then I realized that people writing about social protest weren’t actually in the streets experiencing it.”

This experience caused Aguayo to consider what it means when the people writing about media aren't the people making it—and that there’s a part of the production process that doesn't get documented.

“As a result, thinking about theory, history, and practice together is the way that we can innovate how to think about media creation and circulation, and how folks are already doing this in our culture,” she said.

Growing up as a member of the working class, Aguayo said she had a sense of wanting the work that she did to have a connection to her life. Her education, she said, seemed to create a distance between her life, history, and ideas.

She mentioned a documentary production class that she instructed 12 years ago where no women were enrolled in the class. Through the creation of Girls Make Movies, a summer camp dedicated to teaching girls to produce their own films, she wanted to combat a gender barrier that controls who gets access to the equipment and who gets to author the creation of films.

“I wanted to create an environment where women felt like they had full access and rights to the technological equipment and the questions on how to use it,” she said.

Growing up “in the shadows” in Los Angeles, Aguayo said she lived just miles from the LA riots in 1992, which followed after a video circulated of Rodney King, a Black man, being beaten by police officers.

“I have grown up with racial tensions my whole life, but when I moved to the rural Midwest, they were coded all differently,” she said. She said she was surprised to move to a town that was divided by a railroad track, with an African American side and Caucasian side.

“And so, I started the Rural Civil Rights Project on the heels of Trayvon Martin, and realizing that my local community had not even understood its own history because it's been submerged and buried.”

The project’s mission involves recovering the “unofficial history that doesn’t get documented” from the perspective of the community.

In addition to these projects, Aguayo recently published Documentary Resistance: Social Change and Participatory Media (Oxford University Press), which explores a documentary’s capacity for social change. She also has an autobiographical documentary, The Ritual, in the works, which focuses on how she and her friends “navigate through womanhood in a non-traditional way,” through a “longitudinal, 20-year look.”

This fall, Aguayo is teaching MACS 326: New Media, Culture, and Society, where students analyze the evolution of digital culture as a human experience that involves deep consideration of structural exclusion and diversity.

In MACS 496: Pandemic Media, an eight-week course that begins in October, students will look at ways in which—not just this pandemic—but how pandemics generally are represented in media, and what kind of work is being done in the cinema to understand what pandemics are and how they shape culture and society. For these classes, Aguayo said she engages in critical pedagogy.

“One key thing about critical pedagogy is you connect; there is a connection between the lives of students and their intellectual discoveries and research,” she said. “In all of my classes I really try to design an experience that connects the course content to our most pressing social problems. New Media, Culture, and Society lends itself to this kind of investigation, exploring how rarely examined new media practices shape our collective lives.”

Aguayo said that she hopes to be someone who challenges thinkers, makers, and historians to rethink historical trajectories and to be more inclusive.

“And so that means, as a production person, what stories are you telling, are you telling the same old stories that have already been told, or are you telling new stories in new ways? In terms of scholarship, how are you innovating and able to contribute to what's missing in the larger social dialogue?” she said.