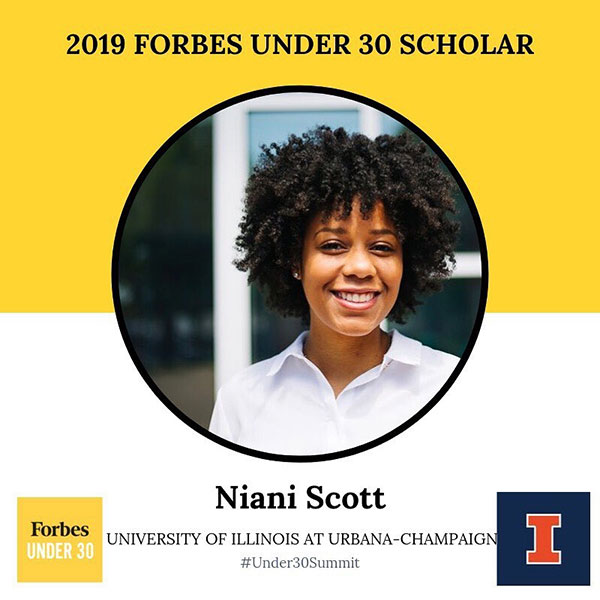 When Niani Scott, junior in journalism, saw some of her peers’ social media posts about the Forbes Under 30 Summit, the event piqued her interest: She’d have the opportunity to build upon her network, practice pitching skills, and learn from A-list guest speakers, such as professional athlete Serena Williams and rapper Quavo.

Scott was one of about 1,000 college students across the nation to receive a Forbes Under 30 Scholarship to attend the summit that was held in October. She was recognized for making an impact beyond campus.

Scott is a 2017 College of Media Roger Ebert Fellow; a 2019 Roger Ebert Fellow at the Sundance Institute; and vice president of the National Association of Black Journalists’ chapter at the University of Illinois. She also produces a podcast, Get to Know Ni (which is currently on hiatus due to finals), and a documentary series about the Black experience at Illinois.

“The Forbes Under 30 summit was really like a career-building and inspirational conference for people interested in entrepreneurship,” Scott said.

The conference helped Scott understand the business side of various industries; she aspires to own a farm and a media production company someday. She said the summit helped her expand her abilities and her mind.

One takeaway came from Melissa Butler, founder and CEO of the cosmetic line The Lip Bar. She talked about abundance and how there’s “enough for all of us” in industries from cosmetics to entertainment.

Scott said the summit “wouldn’t have been what it was” without For(bes) the Culture, a subset of Forbes, whose parties and panels were more beneficial because they were “culturally catered to.” The highlight of her experience was a panel of African American journalists who were cutting hair as they gave interviews.

“I would encourage all of my friends to go to the summit because, first, we got a scholarship to go, and also it was just a great time to network with different students and higher-ups,” she said.

“Being accepted as a Forbes Under 30 Scholar is a small but important step to becoming a Forbes 30 Under 30 List member, and I strive to one day make this list.”