The Coke you drink with your hot dog this summer may seem a simple, sugary, all-American beverage, but the history behind it is complex and global, says a University of Illinois professor and author of a new book.

It’s a history that goes back a century and a history of early innovation in practices now common in the global economy—image-making and outsourcing among them, says Amanda Ciafone.

“The Coca-Cola Company is not in the business of selling soft drinks, but in the business of selling the selling of soft drinks,” said Ciafone, assistant professor of media and cinema studies and the author of Counter-Cola: A Multinational History of the Global Corporation, published this month by the University of California Press (with a multimedia digital introduction here).

“Coca-Cola doesn’t own the vast majority of its bottling production; other companies do that,” Ciafone said. “Instead, what it owns and guards aggressively and invests in heavily is the production of its images and its intellectual property, and its financial relationships.”

The company learned early how to cultivate image and culture to sell its products; how to outsource and franchise production; and how to externalize social, environmental and health costs—all practices replicated by other companies, especially in recent decades, she said.

Ciafone describes herself as a cultural historian of capitalism. She noted that though Coca-Cola is an American company, “most of its lived history has actually been outside of U.S. borders.”

In Counter-Cola, she takes that global history back to the 1920s and 1930s, and then following World War II, showing how the company moved into new countries and regions, established relationships with local bottlers, worked to eliminate competition and developed advertising.

“In truth, the bottlers were very often Americans who’d worked in other bottling companies and then got into partnership with a local person,” Ciafone said. Local Coke advertising often emphasized local ownership, but “very frequently that is not actually how it played out.” 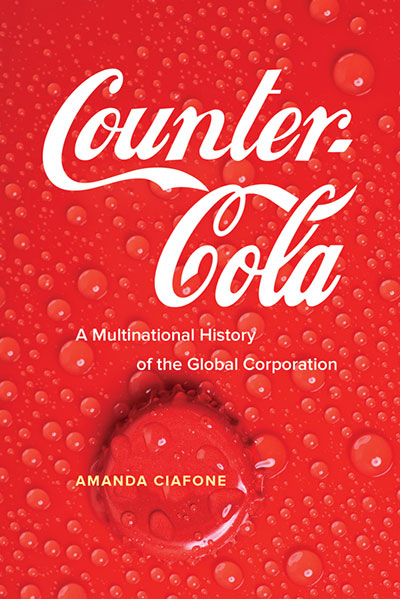 Even where the bottling operation was franchised, the company kept firm control over advertising and many other aspects of the business through complex contracts, Ciafone said. It often stressed the benefits of Coke production and sales for national development, yet most of the profits came back to the U.S.

To sell its product to consumers, Coke often adjusted its advertising to each local context, selling the beverage as a sign of modernity or of middle-class status—or as a developer of local economies, or as a workday refreshment safer than beer.

Within the bigger picture of Coca-Cola’s global expansion, Ciafone focuses much of her book on its history in two countries, Colombia and India, laying out how it has been confronted by activists and movements, as well as governments, and then changed its global system in response.

In Colombia, the challenge came from a labor movement that confronted the way the local Coke bottling plants outsourced labor and made jobs more demanding and less secure, with compliance enforced by violent paramilitaries. In India, the challenge came from Hindu nationalists concerned about cultural invasion, and later from environmentalists confronting Coca-Cola in its massive use of water.

By focusing on local opposition to company practices, Ciafone said she wanted to write a different kind of history from what is common. Histories of corporations or of global capitalism often focus only on executive decision-making, or make companies seem all-powerful, or give a sense of “a train that’s left the station and is just bearing down through history,” with opposition useless, she said.

Instead, Ciafone said she wanted to show how the Coca-Cola Company, as it exists today, “isn’t solely of its own design” due to the various movements and forces that have challenged it around the world. Though that opposition can often seem powerless in the face of a massive corporation, that’s not always the case, she said.

“In fact, I did see changes happen. Movements required the company to change its business practices, sometimes very directly, and at the least to talk about the ways it was going to change, and to provide new justifications for why it belongs in our life.”

“This is particularly important for a company like Coke, where so much of its marketing is making an argument that it’s about creating happiness in our lives,” Ciafone said. “Because the company puts itself out there as meaning ‘happiness’ to justify its business, and asks us to participate in that meaning-making, we can also make claims on it. We can require it to live up to that justification.”