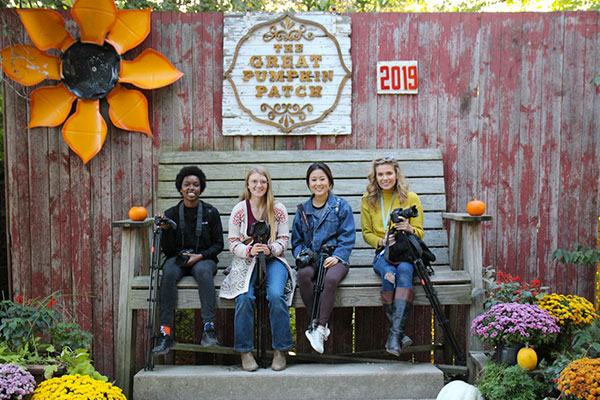 “It was interesting to find a project that hit multiple areas,” Ledford said. “Agriculture, engineering, and economy—and sheer weirdness—were just perks.” He decided Punkin Chunkin would be a great experiential project for his Multimedia Journalism class.

Ledford is always on the lookout for a semester-long project that will engage students by reporting on something interesting and informational. Past projects focused on the Affordable Care Act in Champaign County and the disproportionate underrepresentation of African Americans in engineering and the sciences. "The idea is to focus their attention toward a topic that compels them to get out of their campus-centric comfort zones, talk to real people and find stories that resonate with a wide audience."

Punkin Chunkin is a competition that takes place after Halloween to see how far one can throw a pumpkin by recreating various launching mechanisms, with an ultimate goal of reaching one mile (5,280 feet). Originally stationed on the East Coast, this event was something that families have participated in since 1986.

Due to an unfortunate accident in 2016 resulting in the injury of a reporter, Punkin Chunkin had been canceled until this year. Because Illinois is made up of mostly flatland, and happens to be one of the largest growers of pumpkins in the country, the Midwest state was the ideal spot for the event’s new home. Punkin Chunkin 2019 was held at the old Chanute Air Force Base in Rantoul, which has an area of controlled flatland and is the perfect space for launching.

Students were assigned to produce print, video, and audio stories so that they can experience journalism on a variety of platforms. Students first interviewed “chunkers” on the East Coast. They shot audio and video during the event on November 2-3. (View a photo album of the students in action. Explore students' video and audio stories.)

"In finding and reporting stories related to the Chunk, student journalists have interviewed physicists and engineers—and even built their own small trebuchets, catapults and air cannons," Ledford said. "They have researched and reported on the history of Rantoul and the economic impact of events like the Chunk on the community.  They have traveled to Morton, Ill., to report on the world’s largest pumpkin processing factory. And they have conducted more than 50 interviews with 'punkin chunkers' from Colorado to Texas to Delaware ranging in age from 11 to 70."

“It’s kind of stressful not knowing what we’re [going to produce] week to week,” said Gabby Vazquez, senior in journalism. “I guess that’s what it’s like to be a working journalist, so this is good experience at the end of the day.”

Partnering with The News-Gazette, students had the opportunity to turn their audio stories into print stories and add to the Punkin Chunkin edition of the Rantoul Press. Some of the audio stories have also been featured on the WDWS-AM NewsTalk 1400 radio program.

“It’s cool to see all of our hard work throughout the semester be used for publication instead of just class projects,” said Meghan Rest, senior in journalism.

Because so much work was done by the students in preparation of Punkin Chunkin, “the students will have a lighter end to the semester,” Ledford said. “I’m sure they’ll appreciate that.”

The weekend of Chunkin

After forming relationships with the competitors, it was time for all the students’ hard work to come to fruition. The class produced 30 traditional video stories and one 360-degree video.

“The event itself was cool. We learned a lot about the physics and engineering that goes behind constructing these machines and launching the pumpkins,” Vazquez said.

A total of 26 machines entered the competition this year. The furthest chunk of the day belonged to a machine named Chunk Norris from the catapult category, which threw a pumpkin 4,091 feet.

“The Punkin Chunkin was a very unique experience in that it allowed me to be hands-on with the local communities and also practice my journalistic skills in real time,” said JJ Kim, sophomore in journalism. “I also learned the importance of planning, organizing, and developing good relationships with others in order to get the highest quality content.”