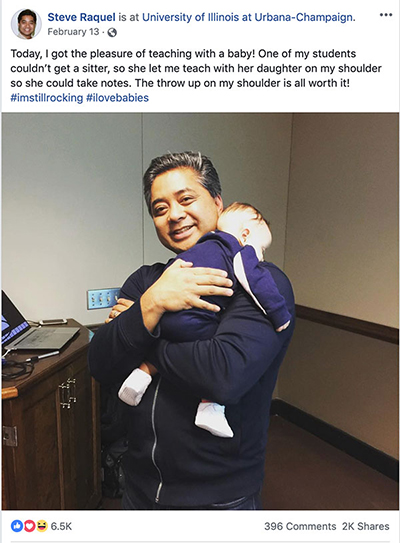 Update: The Chicago Tribune featured Steve Raquel on April 25. Check it out!

Before Steve Raquel’s ADV 409/509 Media Entrepreneurship class began this spring, one of his students told him that her child care might not be completely set throughout the semester. She asked if it would be okay to bring her baby to class if necessary.

“I said, ‘No problem—but I may want to hold the baby if you’re okay with it,’” recalled Raquel, an adjunct instructor in advertising. “She was.”

So one day in February, when the senior in advertising needed to bring her baby to class, Raquel was more than happy to teach while holding the baby. He posted a photo on social media of himself with the child, with the caption: “Today, I got the pleasure of teaching with a baby! One of my students couldn’t get a sitter, so she let me teach with her daughter on my shoulder so she could take notes. The throw up on my shoulder is all worth it!”

His photo was a hit, with more than 6,000 reactions and 2,000 shares on Facebook. The local news station WCIA-TV interviewed him about the experience.

When the baby visited his class again in April, he shared a video snippet as he was teaching with the baby swaddled around him, and it’s had nearly 3.2 million views (and counting), almost 92,000 likes, and more than 3,600 comments on his LinkedIn page alone.

“Based on how this is being received on social, I’m realizing that people want to see positivity in today’s world,” Raquel said. “Also, in academia, I think there is a stigma that you can’t or won’t be able to pursue your dreams when you have a baby because some professors or schools won’t flex to make it happen. Knowing that there are institutions of higher learning, especially the University of Illinois, where teachers will work with their students to make learning happen, gives people joy and hope.”

As an educator, Raquel wants to remove the obstacles that are in the way of student success. “In some respects, it means giving more time to complete a project, or sitting down with them to explain things more. If my student who really wanted to learn and be present needed to bring her infant, I owed it to her (and any student) to make it happen,” he said. “And it wasn’t a big gesture in my mind, just one that I knew could help her.

It just so happens that Raquel is a licensed foster parent and has taken in nearly a dozen children over the past two years. “I’m already tuned in to the needs of a single parent who struggles,” he said. “I’m wired to help and so this wasn’t a hard decision to make. And holding a potential future Illini baby is worth it in itself.”