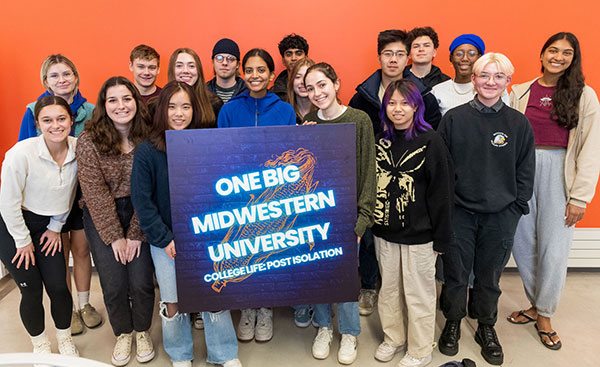 When Angela Aguayo, associate professor of media and cinema studies, was considering a project for her MACS 199: Documentary and Social Change honors course that would help her students connect the community through media, the idea for a student-generated podcast came to mind.

She knew podcasts were a familiar forum for university students and would offer an opportunity for them to talk about meaningful topics, helping them to make sense of what they’ve endured in the last couple of years.

“These are kids who missed rituals around their formative years because of what happened [with the COVID-19 pandemic] and they’re trying to pick up the pieces and understand what education means to them. So, I thought this [podcast] would be a really great way to integrate the practices of storytelling with their own experience,” Aguayo said.

What she didn’t anticipate is how much she would learn by listening to each of her student’s stories, which spotlight the highs and lows of the college experience in a post-isolation world.

“This is a wonderful moment—they delivered more than I expected. Many of these students are science and engineering majors and I was delighted at their embrace of media arts practice, and I learned so much about them through the stories they filed,” Aguayo said. 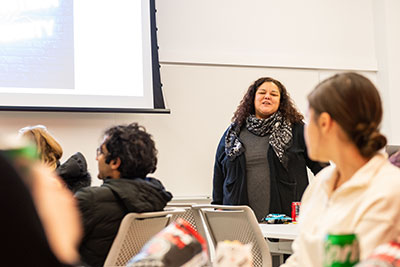 Aguayo’s course, which was restricted to Chancellor’s Scholars in the Campus Honors Program, drew students from the Grainger College of Engineering to the College of Education to the College of Fine and Applied Arts. Their 19-episode podcast, which is aptly named “One Big Midwestern University,” features students talking about how to make friends as college freshmen, finding simple joys, isolation, the pressure to find jobs, anti-transgender culture, and more.

“I was moved by the students’ willingness to share and be vulnerable. They saw that in the most effective documentary films that created change, that’s what was there, getting to something real and honest,” Aguayo said. “Your audio can be messed up a little bit and your images can’t all be great but if you’re delivering real and honest [material], it’s compelling.”

Freshman Elias Newton, majoring in architecture, chose to talk about dealing with feelings of loneliness and substance use on campus. Newton said the project helped him to realize that “most people are going through something.”

Newton also appreciated the class’s emphasis on learning the art of storytelling.

Emma Schmahl, a freshman studying elementary education, filed a story on making friends as a freshman. Schmahl said she wanted to hear people’s personal experiences, and to get advice on what works and what doesn’t.

“The assignment taught me how to talk to people in an interview setting and then [how to take] these pieces of audio and [make] something out of it,” Schmahl said.

The “One Big Midwestern University” podcast is also made possible thanks to Aguayo’s Illinois Community Media Project, funded by Chancellor Jones’s Call to Action to Address Racism & Social Injustice Research Program. One pillar of her project, which began nearly two years ago, is finding ways to get students to engage with communities around media production.

Aguayo is grateful to be at the University of Illinois, where she feels encouraged to offer her students hands-on learning experiences with community media.

“I came to this campus because I wanted to be with people who innovate and think about the university’s connection to the world. It’s exciting to be in an environment where innovation in public engagement is supported, and to be at an institution that brings the smartest and the brightest and the accomplished students to campus,” Aguayo said. 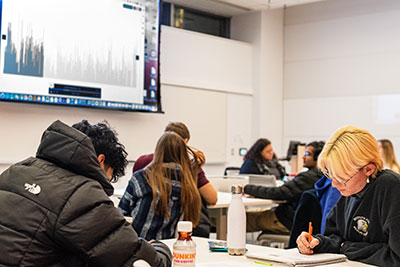 While most of the students in the class are new media-makers, Aguayo said when she first suggested the idea of a podcast to her students, they were excited and eager to tell stories that connect people.

Schmitt said the class offers an invaluable experience, using sound to convey a message and even perhaps spark a social change.

“I think we need more people with the skills that this class is teaching us,” he said. “The class teaches us we can use these forms of media to try to cause some sort of social change. And that’s important because a lot of people don’t think that they can cause change just by creating something and putting it out there, but you can. I think it’s important to know that you can cause the change that you want to see in the world.”

“One Big Midwestern University” debuts on Spotify on December 15. The podcast will soon be listed on Apple Podcasts and Google Podcasts. The united hope of the class is that it might bring people together to discuss topics that are important to students and that it provides value to the community.

“I think it would be nice if [people] listened to it and they hear real stories that are a little bit different from what they’ve heard before,” Schmahl said. “I just want people to hear it and feel like they can relate to other people’s experiences and know that what they’re experiencing—if it’s happy or not so happy or stressful—other people are experiencing the same things and they’re not alone.”