We are sad to learn about the passing of Jenny Lenzini (BS '16, journalism), who died on November 15 after a motorcycle accident. She was a reporter at WBBH-TV in Fort Myers, Florida.

"Her bright smile and passion for storytelling instantly made her a standout reporter in the Southwest Florida market," wrote Vanessa Bein, in an announcement on behalf of Waterman Broadcasting. Two other University of Illinois journalism alumni worked with her at the TV station: Claire Lavezzorio (BS '16) and Jacob Diaz (BS '19).

U of I journalism faculty members recall Lenzini as "bubbly, with so much potential," and a student who "quickly found her talent."

"Jenny impressed me in her after-college life, as she was more determined than ever to make it in this crazy world of TV journalism," said John Paul, a retired lecturer in journalism. "She occasionally sent me samples of her work for critique. She had so much potential."

"She helped lead her JOUR 445 class to win a NATAS Crystal Pillar for UI-7 News" as the best college newscast in Mid-America, said Ken Erdey, instructor and technical coordinator for Richmond Studio, where UI-7 student broadcasts are produced. "She showed talent and quickly found her talent."

She previously worked at KTIV-TV in Sioux City, Iowa, as a news anchor and multimedia journalist, where she won an Emmy Award.

Lenzini, originally from Crystal Lake, worked for The Daily Illini as on-air talent and was a Chi Omega on campus. 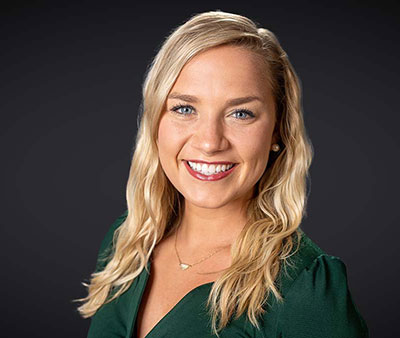