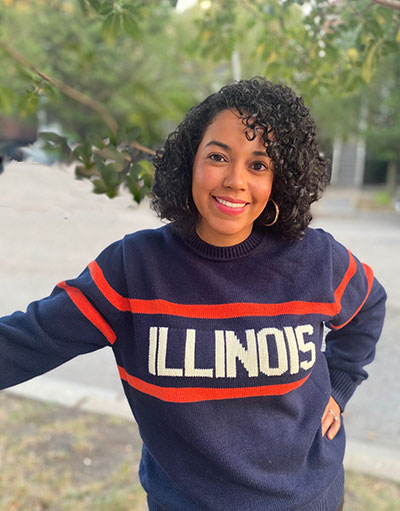 Suheily Natal Davis (BS ’04, broadcast journalism), senior director of global diversity, equity, and inclusion at McDonald’s, has led a life of championing others through her professional and personal endeavors.

She felt the difference that a welcoming community and a strong support system can make during her time at the University of Illinois.

“I think there were so many instances where such a big school felt very cozy and warm because of how other diverse students looked out for some of us who were coming in, especially from Chicago,” Davis said.

Because of the impact of her work and volunteerism, Davis has been selected as the inaugural recipient of the College of Media Emerging Leader Award.

“We created this new annual award to honor an alum whose early career accomplishments and engagement with the College of Media are exemplary,” said Dean Tracy Sulkin. “We’re proud to acknowledge the important work that Suheily has dedicated her career to, while serving her community in leadership roles, and engaging with and supporting students in the College of Media.”

Davis currently serves on the board of directors for the Illinois Equal Justice Foundation and the National Employment Law Council. She previously served on the College of Media’s Leadership Council, on the board of directors for the Diverse Attorney Pipeline Program, and on the associate board for CARPLS, the largest provider of free legal aid to Chicago area residents. Davis also stays very close to her roots on the south side of Chicago through the graduate chapter of her sorority, Alpha Kappa Alpha Sorority Incorporated, by working on mentorship programs aimed at supporting young girls from her neighborhood.

Davis has also held leadership roles in legal organizations aimed specifically at increasing the meaningful retention and participation of women of color in the legal profession, both the Puerto Rican Bar Association of Chicago and the Black Women Lawyers’ Association of Greater Chicago. In 2017, Davis was named by the Chicago Daily Law Bulletin as one of the top 40 attorneys under 40 to watch.

“In my house we didn’t always have much, but what we did have we always shared with anyone who needed it. The truth is, I would not be in the rooms I am in today had it not been for others who invested in my development and brought me along with them,” Davis said. “The least I can do to honor the people who created opportunities for me is to help open doors and break down barriers for others. The experiences I have had serving my community, legal or otherwise, have helped give me so much perspective and serve as constant reminders that we are all better when we work together.”

She joined McDonald’s Corporation in 2014 as senior counsel for global labor and employment, where her work primarily focused on counseling around issues of fair treatment in the workplace, including maintaining a safe and respectful workplace free of harassment and discrimination of any kind. In 2019, after working exclusively with McDonald’s U.S. business, Davis transitioned into the role of general counsel for McDonald’s Latin American markets.  During her time in the legal department, Davis helped develop and lead the legal department’s diversity, equity, and inclusion strategy. She was promoted this year to her current role, in which she partners with the McDonald’s U.S. leadership team to drive strategic diversity initiatives.

“The role combines my passion for equity and fairness with my love for counseling, people, development, and community service,” Davis said. “My best days are when I get to work alongside one of our leaders to help them grow in their journey to be more inclusive and empathetic, or when I get to weigh in on how our brand will use our size and scope to produce meaningful change in society. This is a big, new role with a lot of responsibility, but I am honored that I get to do this work.”

Her roots in journalism stemmed from being fascinated with news and people stories. (So much so that her childhood punishment was that she couldn’t watch the news or her favorite investigative shows, 20/20 and Dateline.)

It was during a First Amendment course in journalism at the University of Illinois when Professor Steve Helle, noting that the subject matter sparked excitement in her, pulled her aside and asked if she ever considered pursuing law as a profession.

After discussing it with her family, she decided to follow that career path and eventually earned her JD from DePaul Law School.

Other experiences at the University of Illinois influenced her dedication to inclusion.

She recalled how she was the only person of color in her first class as a college student and realized she would need to navigate spaces with people of different backgrounds, communicating about differences, and across cultures.

“I feel like I grew a lot,” Davis said. “I was stretched in different ways beyond just academics. That concept of lifting while you climb and making room at the table for everyone, that collaborative nature, is something that was fostered at the time I was in college.”

Davis has been lifting others in many ways. Six years ago, she and her husband started a foundation called The Perfect Cadence following the tragedy of losing their daughter. The foundation provides baby showers and celebrations for families who do not have access to resources, and it also provides support for families who have experienced similar losses.

“For me, frankly, I had to give some sort of meaning to that loss to be able to cope,” Davis said. “The foundation was a way to create memories that could stand in place of the memories that we couldn’t have with our daughter, and it’s given us just that.”

Davis has come a long way since being a college student who regularly battled self-doubt. She offered words of encouragement for current students:

“Trust that you are here for a reason, your voice matters, your instinct and your presence are valuable,” Davis said. “There’s frankly so much in the world to deter you and you may have your own difficulties or conflicts, but trust that you are right where you are supposed to be and take a moment to enjoy what’s around you.”