Update April 5, 2021:  The recording of this event is now available to watch on YouTube. 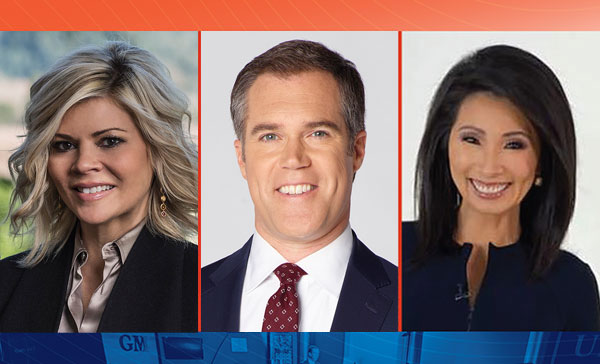 The College of Media will celebrate the Richard and Leslie Frank Center for Leadership and Innovation in Media with a virtual kick-off event on Wednesday, March 31, at 7-8 p.m. (CT).

Leslie (Miller) Frank, an Emmy award-winning broadcast journalist, will host a conversation about media leadership and innovation with Peter Alexander, chief White House correspondent for NBC News, and Judy Hsu, ABC 7 Chicago anchor and Media alumna (BS '93, journalism), with time at the end for an interactive Q/A. The event is free and open to the public; registration is required to receive the Zoom link.

“It’s a fascinating time to be a journalist, and it’s also challenging, but the important thing is to always go back to the fundamentals—what is the story you need to tell the public? Now more than ever there is a critical need for good, solid, objective journalism in this country,” said Rich and Leslie Frank.

Rich Frank, who received his bachelor’s degree in marketing from the University of Illinois, is former president of Disney Studios and former president of Paramount Television Group, and served three terms as president of the Academy of Television Arts and Sciences. Leslie Frank spent more than 25 years covering major stories including the 9/11 attacks from ground zero in New York City, as well as from the scene of the devastating aftermath of Hurricane Katrina, and inside the courtroom at the Michael Jackson trial. She spent the last nine years of her TV news career reporting and anchoring at the #1-rated station, KABC in Los Angeles.

The Franks, who are now vintners and hospitality leaders running Frank Family Vineyards in Napa Valley, established the Richard and Leslie Frank Center for Leadership and Innovation in Media in October 2020 by making a historic gift of $7.5M to the College of Media, the largest gift ever made to the college.

“The creation of the Frank Center is an infusion for the College of Media at a time where support for our students and programs is vital in preparing the next generation of media professionals,” said College of Media Dean Tracy Sulkin. “We're excited to host important conversations about the evolution of media with accomplished and innovative leaders in the field.”

The kick-off conversation is the first of many engaging events to be offered by the Frank Center, which will host a diverse group of media experts and practitioners through a distinguished speaker series, residencies, symposia, professional development support for students, and more. The Franks’ gift will also provide facility upgrades in Gregory Hall classrooms and in Richmond Studio, where journalism students produce broadcasts for UI-7.

“The Department of Journalism is thrilled to work with the Franks to provide students experiential learning opportunities and access to media experts that they can’t get anywhere else,” said Professor Stephanie Craft, head of Journalism.

Rich and Leslie Frank have frequently shared their expertise with UIUC classes, speaking with students and faculty in both the College of Media and the Gies College of Business, and advising journalism students on their television news broadcasts and resume videos. Their next virtual visit will be in an advanced video storytelling and producing course to discuss a case study on how to be in control of an interview.

“The world is changing and being changed by journalists, and the definition is changing, too,” added Rich Frank. “It’s an exciting time to be launching this.”