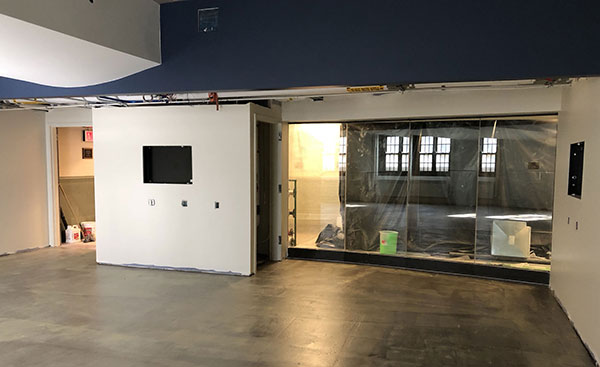 College of Media students and alumni may remember pre-pandemic late nights cramming on big projects in the dimly lit basement of Gregory Hall (not to mention the Doritos and Coca-Cola dinners from the vending machine). But thanks to college and campus funds, the basement will soon have a new makeover with long-awaited renovations to Rooms 13, 29, and 31 completed in time for spring semester.

Rooms 29 and 31 used to be joined as one big classroom, with 31 as a computer lab and 29 as a little nook with tables and chairs. They will now be two separate rooms and 29 will act as a small media production space, said Meghan Burnett, director of information technology and operations. It will have a green screen and camera equipment for students to produce videos and do photo shoots. There will also be post-production equipment for students to edit material.

Room 31, meanwhile, will become an iFlex classroom, meaning it can be easily restructured to fit the needs of the class, Burnett said. The remodeled classroom will fit more than 40 students. Chairs and tables will all have wheels so they can be reconfigured, whether it’s in a lecture format sitting all in one direction or in a pod format for group work. Screens will fill the perimeter of the room and students and faculty can use their smartphones or laptops to share their work on the screens.

“It can accommodate a variety of different teaching styles,” Burnett said.

Room 13, a computer lab, will have new computers and a new large screen in the front of the classroom, Burnett said. It also received a new ceiling, new flooring, new paint, new AV equipment, and better lighting and ventilation. The class will now face to the west—rather than its old position facing the north—which allows for a better arrangement of the desks.

The overall cost of the project is a little over $1 million, Burnett said, and was paid for with a combination of College of Media funds and campus capital project funds.

The renovation has been in the planning process since the 2018-2019 academic year. Construction began in January 2020 and paused in March due to COVID-related shutdowns, then resumed in June. The rooms will be utilized beginning in spring semester, but will not be used to their full capacity until the pandemic is over and social distancing requirements ease, Burnett said.

Faculty members in the College of Media advised on equipment, room layouts, and furniture. Victor Font, lecturer in media and cinema studies, provided recommendations for what should be included in the production room and will be using it frequently for his classes. He shared that, while he said the space will be too small for filming big action scenes, it will be helpful for still shots, close-ups, interviews, and casting auditions.

He said it will also be important for teaching students how to use green screens and camera equipment.

“The idea is for the students to use [the equipment] without being supervised by the TAs or professors so that they can go there and use the room [as needed],” Font said.

One of the courses he plans on using the production room for is MACS 140: Smartphone Cinema, where he’ll have his students create a moving car scene using the green screen.

Font said these changes are something he thinks students will be excited to use and will provide great opportunities for experiential learning.

“It will make our 80-year-old building look a little more modern,” Font said.

However, while the renovations to the Gregory Hall basement are exciting to many, some student filmmakers may not be pleased, Font added.

“It was a perfect place to film a horror movie. Not anymore,” Font said, with a laugh. “So we’re going to need to find another basement for that.”