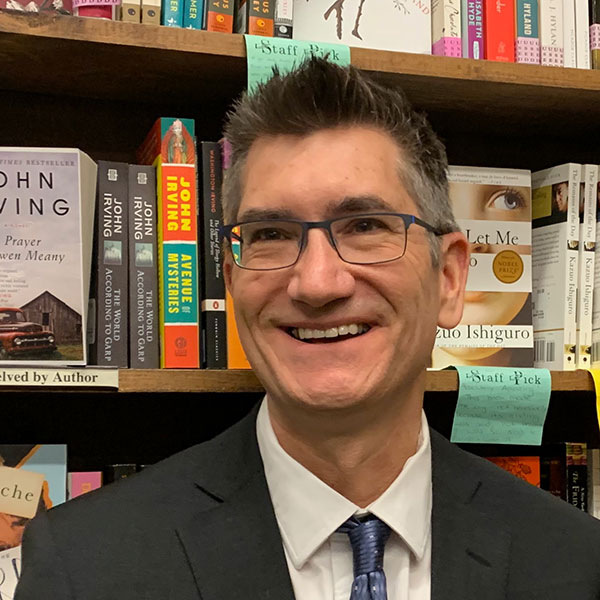 Chris Evans, a new clinical assistant professor in the Department of Journalism, first knew he wanted to be a writer in middle school after winning fourth place in a national competition for a science fiction story he wrote.

“I grew up blue collar in a small town in Kansas.… That didn’t happen to people, so it was one of the most wonderful things in my life,” Evans said.

But because most of the writers he knew were reporters, he decided to pursue journalism instead. He became editor of his high school newspaper and later went on to study journalism at the University of Kansas.

Evans’s position in the Department of Journalism is brand new in the college. His main responsibility will be facilitating the connection between the College of Media and Illinois Public Media by helping students get their work on air. His office will be located at IPM.

“The ability to be able to work in education, but actually be located in a working newsroom, is sort of beyond my wildest dreams,” he said.

This fall, he is also teaching Journalism 200: Introduction to Journalism. Normally, he would be teaching Audio Journalism, but can’t under current conditions with COVID-19. However, he will still be working with a few students on audio journalism.

He said his position will help students receive real newsroom experience and allow them to create work that is held to a professional standard with local, and possibly national, reach.

“There are two very different ways of thinking about the world when it comes to journalism: one is the academic way and the other is sort of the newsroom way.… The standard for publication and airing broadcast is often different in a journalism class than it is in a newsroom,” Evans said.

He added that when students have their work sent to IPM, it will be edited by professional journalists. His goal is to create a system where the reporters at IPM are mentors to the students.

“My goal is to make it something where people have to attain a certain level of expertise in order to get the work and to be a beat reporter,” Evans said. “You might go and be the one who is covering the school board meetings for the education reporter, while she works on bigger projects and longer-term things. But she would also be your main contact for improving your work and be a constant source of support to you.”

To help acclimate to the new position, Evans said he will have a lot of conversations with professors, students, and working journalists to discover what is needed in the Department of Journalism. Normally, he said he would like to do this over coffee, but it will have to be by video or socially distanced this fall.

“I love starting from scratch and seeing what the resources are and what the needs are, and then using those resources and filling those needs,” he said.

This is not the first time Evans is taking on an entirely new position for a university. Prior to coming to the University of Illinois, Evans worked at the University of Vermont as the student life assistant director and the student media advisor. He worked with students on the weekly newspaper, 24/7 radio station, streaming television station, and related websites. He also taught courses in news writing, media law, and leadership.

He has a variety of journalism and teaching experience. Evans was a reporter for The News-Press in Missouri and he was bureau chief and news reporter for Florida Today. He was also in the Peace Corps, where he was an English teacher trainer and the editor-in-chief for The Tang-Cu Times.

His other teaching experience includes working as a faculty writing instructor and teaching mentor at NYU and a news advisor and communications professor at Valencia Community College. He was also the president of the College Media Association, an organization of more than 600 college media advisors.