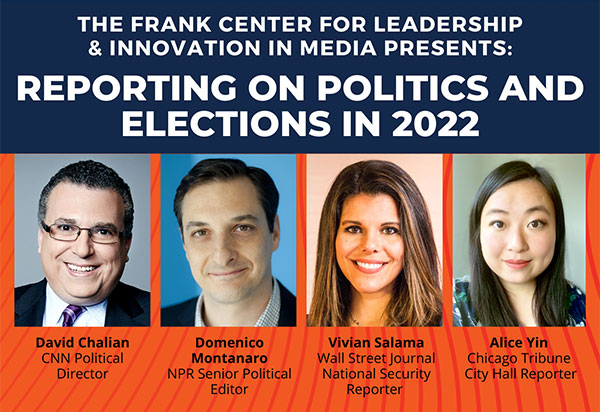 The Richard and Leslie Frank Center for Leadership and Innovation in Media at the University of Illinois Urbana-Champaign will host four of the country’s top political journalists—David Chalian from CNN, Domenico Montanaro from NPR, Vivian Salama from the Wall Street Journal, and Alice Yin from the Chicago Tribune—for a panel discussion on what it’s like to cover politics and elections in 2022.

The event is free and open to the public and will be broadcast live via Zoom; register to join via Zoom at https://go.illinois.edu/politics-elections-2022.

The panelists will weigh in on the upcoming midterm elections and potential national outcomes, from the fate of President Joe Biden to the control of Congress, and more. Audience questions will be welcomed toward the end of the hour or may be submitted through the Zoom registration form.

David Chalian is CNN's vice president of political coverage and political director. In his role, Chalian oversees CNN's daily political coverage across all platforms, the polling and decision desk operations, and helps guide the editorial content for the network's special event political programming.

Domenico Montanaro is NPR's senior political editor/correspondent. Based in Washington, D.C., his work appears on air and online delivering analysis of the political climate in Washington and campaigns.

Vivian Salama covers national security for the Wall Street Journal, based in Washington. She has covered U.S. foreign policy and national security issues for nearly two decades, reporting from more than 75 countries. Most recently, she has reported extensively from Ukraine.

Alice Yin is a reporter for the Chicago Tribune’s metro desk, responsible for covering the ins and outs of Cook County government and the Obama Presidential Center.

This event is presented by the Frank Center for Leadership and Innovation in Media at the University of Illinois College of Media.

For more information, please contact Colleen King, director of the Frank Center for Leadership and Innovation in Media and clinical assistant professor of journalism, at cck@illinois.edu.