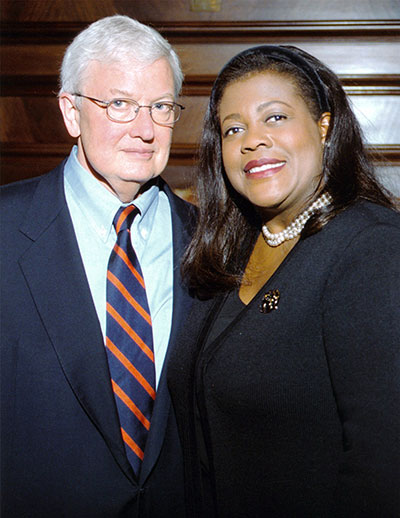 The College of Media at the University of Illinois Urbana-Champaign is excited to announce that the Roger Ebert Center for Film Studies will officially launch this year, with programming to begin in Fall 2022.

Thanks to gifts totaling more than $5 million from a collection of donors—inspired by a lead gift from Roger and Chaz Ebert (pictured at right)—funding will support robust annual programming, including the Ebert Symposium, Ebert Lecture, and a screening series.

The famed Roger Ebert, who died in 2013, was an Urbana native, a University of Illinois journalism alumnus (BS ’64), a longtime film critic for the Chicago Sun-Times, and co-host of numerous televised movie review shows. He was the first film critic to win a Pulitzer Prize and the first film critic honored with a star on the Hollywood Walk of Fame.

“Unlike many centers on film studies, which focus primarily on the skills of making a film, Roger’s Center will also focus on analysis and study of films, the state of the industry, and the impact of film on individuals and society for personal and social change,” said Chaz Ebert, CEO of Ebert Digital LLC and cofounder of Ebertfest.

“This new center will undoubtedly elevate the University of Illinois and the College of Media in the discipline of film studies,” said Dean Tracy Sulkin. “We are eager to realize the Eberts’ vision of making Illinois the place that inspires generations of students and scholars and are grateful for the generosity of those who are supporting us in making this happen.”

A faculty member from the Department of Media & Cinema Studies will be appointed director of the Roger Ebert Center for Film Studies. The director will coordinate event programming, Ebert research grants and travel grants for film studies, the Ebert Fellows Program for undergraduate students, and equipment and operations support for the teaching of film production.

“Through its support of engaging research, production, and public lectures and discussions, the Roger Ebert Center for Film Studies will enrich experiences and facilitate connections, especially for our students and faculty in media and cinema studies,” said Professor CL Cole, head of the Department of Media & Cinema Studies.

Special kick-off events will be scheduled during the 2022-23 academic year, and, in collaboration with the Spurlock Museum, the Knight Auditorium will be outfitted with new equipment to create a first-rate screening space for campus.

When the Eberts established the endowment for the center in 2009, Roger said: “The University of Illinois is deep in my heart as a great institution. It informed and enriched me. Although there were no film courses when I was an undergraduate, it nevertheless guided me in my lifelong love of film.”

The University of Illinois is honored to celebrate Ebert’s legacy through this new center.

If you wish to contribute to the center, you can give online and select “Roger Ebert Center for Film Studies” under Champion Innovation in Media Research & Collaborations.

For media inquiries, please contact Holly Rushakoff at the College of Media at (217) 333-3949 or media-news@illinois.edu.