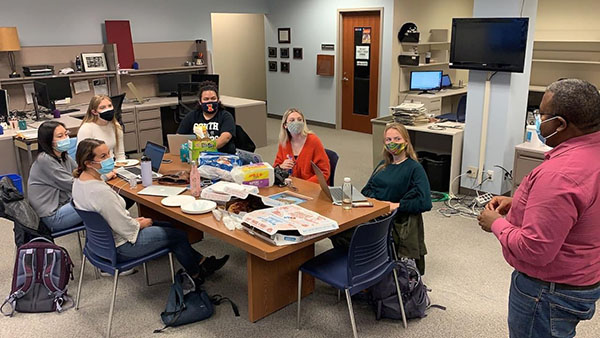 The reporting initiative—led by Chris Evans, clinical assistant professor of journalism, and Reginald Hardwick, news and public affairs director for Illinois Newsroom—put these talented students into the field to practice the skills they’d learned in class, producing more than a dozen stories for both broadcast and the Illinois Newsroom website throughout the course of the day.

Hear their experiences, told in their own words:

"By being able to work for a professional news outlet on the day of one of the most contentious presidential elections yet, I was able to learn so much about myself as an aspiring journalist. Journalism is truly a trade that you learn by doing and having the opportunity to cover local communities throughout Election Day was unlike anything I had ever covered before. I was able to learn and report in a safe environment, while still handling the pressure of working on tight deadlines and being responsible for accurate stories. Covering the election for Illinois Public Media has ensured my passion for journalism and telling stories throughout my future career in media." —Farrah Anderson, freshman

"Being a part of a news team for a professional media organization on Election Day was an incredible learning experience. As someone just starting their journalistic career, this was a great opportunity to cover an election, especially one as contentious and significant as this one. It was great to hear so many perspectives on the multitude of issues surrounding this election, as well as honing my skills in audio journalism. This experience also really solidified the importance of journalism in these crazy times. Despite being a hectic day, I’m very grateful I had this opportunity to grow as a young journalist and be a part of an important part of history." —Vivian La, freshman

"This year brought many firsts, including my first time voting and first time covering the election. Covering the election as the audio editor meant I was the middle person between the story and the radio, helping the journalists by cutting their interviews and editing out background noise to craft polished pieces in the name of democracy. During a time of misinformation from our own president, covering election night was almost a paradoxical gift. I was able to watch in real time the numbers roll in, hearing the stories of what was happening at polling stations around the county from the journalists themselves as they returned to the station. In a way, through cutting sound waves and modulating frequencies in Audition, and occasionally Logic Pro, I contributed to a greater movement against fascism. The adrenaline rush that comes with imminent deadlines is part of what college is about, so bring it on radio!" —Julia Morrison, senior

"Working on Election Day was a great learning experience! It was a day of firsts for me as I had never covered an election before, nor have I ever written anything for a professional radio station before. It was a fun and fast-paced day, and I loved working with Vivian, Cesar, Farrah, Gwyn, and Julia. I had the opportunity to further practice my journalism skills and interview people with a diverse range of perspectives. I'm so glad that I could play a role in this historic and unprecedented election." —Marissa Plescia, master’s student

"It was truly an amazing experience to go out and cover the election. I was able to meet lots of interesting people in the voting polls. Also having a group of amazing people to work alongside was truly a blessing. I’m so happy that I learned what it took to cover an election and what goes on behind the scenes at a news station. Never in a million years would I have found myself covering a presidential election, and I am so glad I had this opportunity! I can't wait to take what I learned from this experience and use that knowledge in the future!" —Cesar Sanchez, senior

"As a first-semester freshman, I was stoked to get the opportunity to report for a professional media outlet on one of the busiest days in journalism. While lectures are helpful, I feel I learn the most when I get out of the classroom and experience reporting as I would in the professional world. Working for WILL’s Illinois Newsroom on Election Night taught me the operations of a newsroom and helped me establish a relationship with the University’s surrounding community. I repeatedly contacted and established connections with election officials in nearby counties and spoke with community members with an influential voice in the local political scene. These connections have provided me with insight into the life of central Illinois civilians and connections for potential sources in future stories. I’m incredibly grateful for the mentorship of Chris Evans and the experience WILL provided." —Gwyn Skiles, freshman