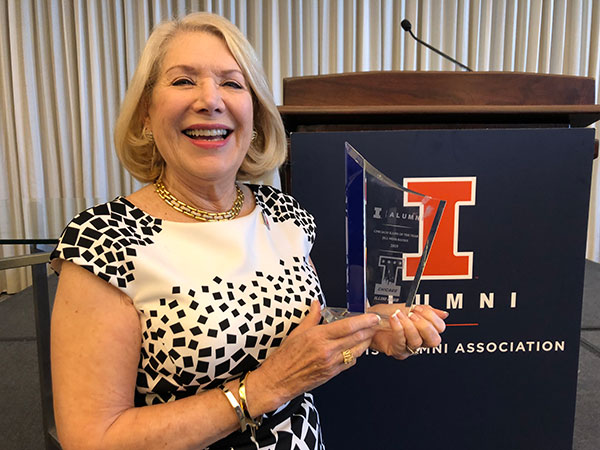 When she received her Chicago Illini of the Year award on May 22, alumna Jill Wine-Banks (BS ’64, journalism) donned a “With Illinois” Block I pin, a tradition with its own hashtag: #JillsPin.

Her pins typically have political significance that comment on the day’s events, which she posts online in advance of her appearances on MSNBC.

“President Trump has made Watergate relevant again and given me a new career as an MSNBC contributor and legal analyst,” she writes on her website. Wine-Banks served as a prosecutor in the Watergate trial, where, as part of her role in the full investigation and trial, she was responsible for cross-examining President Richard Nixon’s secretary Rose Mary Woods about the 18.5-minute gap on one of the Watergate tapes.

Throughout her career, Wine-Banks has pioneered a path for women. She was the first female attorney in the organized crime section of the U.S. Department of Justice, as well as the first woman to be the executive director of the American Bar Association. She also had the honor of being appointed as Illinois’s first Solicitor General and then promoted to Deputy Attorney General (again the first female in that role). 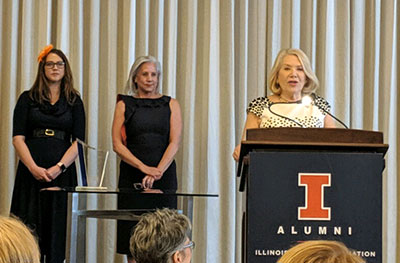 At the Chicago Illini of the Year award ceremony, Wine-Banks said the University of Illinois has made a big impact on her life, a place where she made lifelong friendships and received a great education.

“I never went into journalism until two years ago,” she said, “so better late than never. But everything at Illinois prepared me for what I am doing now and what I’ve done in between.”

In particular, she spoke about the value of critical thinking skills, which helped her as an attorney and now helps her answer questions on live TV during breaking news. “I think that’s the most important thing any education can offer.”

Wine-Banks thanked several professors who had a tremendous impact on her: James Carey, a journalism professor and dean of the College of Communications (as it was named then), and Stuart Nagel, a political science professor who taught a course on constitutional law.

“I was very active in the civil rights movement then,” she said, “and I took [Nagel’s] course to help me prepare to make better arguments.” That led her to pursue her law degree at Columbia University.

“I also remember my first day in the journalism school as a junior, where I sat at a typewriter, and was asked to write my biography,” she said. “When I got my biography back, it had a big circle around the word ‘conflagration.’ And the teacher had written, ‘If you meant fire, say fire.’ And that experience was a great lesson on being able to communicate to juries, and now to the television audience. I use words that people understand. I’m not trying to impress them; I’m trying to inform them.”

She fondly recalled classes in cooking, Russian literature, and architecture, and being a member of the young Democrats, The Daily Illini, and other activities that she says taught her leadership and communication skills.

“I really feel like I got a very broad and well-rounded education, so thank you, Illinois, for that.”

Wine-Banks is currently working on a memoir about her Watergate years, scheduled to be published in 2020.