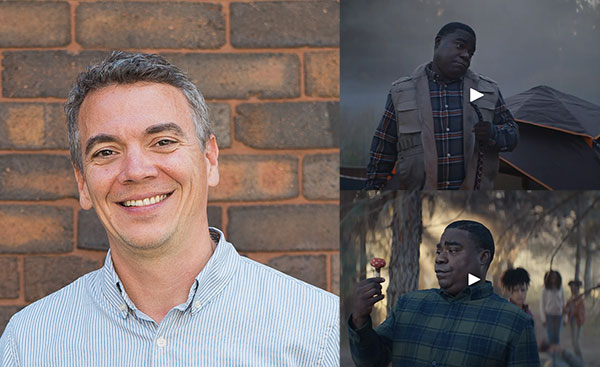 Patrick Burke doesn’t usually like waking up to a work text at 5 a.m. … unless it’s saying that his commercials got the #1 and #2 spots for the USA Today Super Bowl Ad Meter poll.

“If I’m gonna get woken up to a work text at 5 a.m., that was definitely a good one,” he said with a laugh.

Burke (BS ’95, advertising) is the group creative director for Highdive, an independently-owned agency based in Chicago. After working for larger Chicago agencies like BBDO, DDB, and Ogilvy, he decided to move to Highdive in 2019.

Highdive’s winning ads this year were two commercials for Rocket Mortgage starring Tracy Morgan, humorously demonstrating the difference between being “pretty sure” and “certain” about buying a home. Burke was the writer for both of these ads. (Watch the ads here.)

Because Rocket Mortgage isn’t a full-time client of Highdive, the agency had to pitch their idea against several other agencies. Their idea was ultimately chosen.

“What’s funny is, sort of immediately, we had Tracy Morgan’s voice in our heads when we were writing the script, and there were times in the process where we were asked to explore backups in case Tracy said no, and we could never find any,” Burke said.

This isn’t the first time Burke and Highdive were awarded top spots on the USA Today Ad Meter poll. Last year, they won the #1 spot for a Jeep commercial starring Bill Murray—which was a play on the classic film Groundhog Day—and the #5 spot for another Rocket Mortgage commercial featuring Jason Momoa.

Burke said it was very rewarding to get the #1 and #2 spots for Rocket Mortgage after getting #5 for them last year.

“I was really, really happy for our clients because it meant a lot to them and it’s a lot of PR,” he said. “It makes all their hard work and championing the idea worth it.”

He said he also enjoyed working with Tracy Morgan, although he wasn’t able to meet him in person this year due to the pandemic.

“Tracy Morgan is just super, super sweet,” Burke said. “We always dealt with him online or over Zoom or on the phone, but he is just the nicest, sweetest guy and just super funny.”

Working with Bill Murray last year, however, was an especially exciting experience for Burke because the actor is a major idol for him, he said. He shared one story about when he was finishing up work and showed up to a dinner with Murray 45 minutes late.

“It’s Bill Murray, you know, he’s famous for just giving people a hard time,” Burke said. “As soon as I walk in I know I’m getting roasted for being late to his dinner. It was just like the highlight of my life, getting made fun of by Bill Murray.”

Burke said going to UIUC and the College of Media gave him a well-rounded education that helped him in his career.

He added that the advertising faculty were very helpful, and he’s stayed in touch Steve Hall and Peter Sheldon, both senior lecturers.

“I wouldn’t trade my education for anything,” Burke said. “I think the faculty and staff have great real-world experience. They all have great connections within the industry and they stay connected to the industry.”

Sheldon said Burke was undeniably talented as a student and that he could tell he would be successful.

“He was one of those students that you know from the first month of having them, the best thing to do is to stay out of their way because they’re going to succeed.”

But despite his talent, Sheldon did fail him on his first assignment for turning it in late.

“He recovered nicely,” Sheldon said with a laugh.

He added that College of Media students can learn from Burke that it’s not enough to just be funny, but that it’s important to be smart too. Burke also proves that students don’t need to go to a portfolio school to be a successful creative in advertising.

Sheldon said he didn’t know when first watching that the two ads from last year were Burke’s. This year, he was looking for them.

“It gives me something to dangle in front of 130 students in a lecture,” Sheldon said. “I can tell the story of how Pat Burke used to sit in that chair there and this is what he’s doing now. I thought a year ago having the first and fifth highest rated ads was like the capstone to an incredible year … then this year he comes back with first- and second-highest rated ads of the Super Bowl. It makes me proud.”