Illinois Public Media and the Department of Journalism are thrilled to officially announce the founding of the Illinois Student Newsroom at Illinois Public Media—a collaborative place for journalism students to work side-by-side with professionals in all facets of a public media newsroom.

“The Illinois Student Newsroom at IPM is a great reflection of our educational strategic priorities at the College of Media,” said Dean Tracy Sulkin. “We’re bringing together two parts of the college—IPM and the Department of Journalism—to foster experiential learning.”

“Illinois Public Media is proud to support the next generation of upcoming journalists through this new student newsroom initiative, created in partnership with the Department of Journalism,” said Moss Bresnahan, executive director of IPM, which is a non-profit public media service of the College of Media.

“IPM is an ideal space for students to gain experience working in the field, while receiving personal guidance from journalists, and producing content for a professional media organization,” said Professor Stephanie Craft, head of the Department of Journalism. 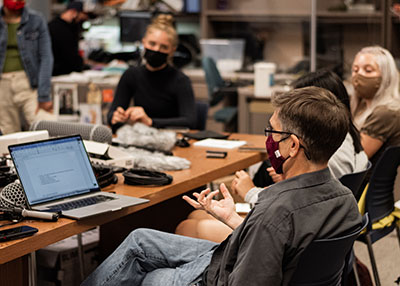 The program is led by Chris Evans, clinical assistant professor in journalism (pictured at right). His position was created in 2020 to facilitate students gaining real-world experience at IPM. The IPM Student Newsroom offers space for students to learn how to report, write, interview, and anchor, as well as build a portfolio of work across audio, video, and multimedia platforms, right in the heart of a dynamic working newsroom.

“Student journalists can now produce segments, create multimedia content, and experiment with a variety of tools, while also gaining a unique experience in a fast-paced professional environment and supporting our public service mission,” Bresnahan added.

In the past year, as the Illinois Student Newsroom was being developed, Evans has connected students with the IPM news team to produce impactful journalism for the greater central Illinois community.

“We have already shown if they’re willing do the work, a first-year student has as much of an opportunity to get on the air as a senior or even a grad student,” Evans said. “And as an educator, it’s been just thrilling to watch the students grow and thrive and begin their careers here at Illinois Public Media. The fact that the students have already started winning state and national awards for their work is awesome, too.”

For example, as an inaugural member of the Illinois Student Newsroom last year, Farrah Anderson—now a sophomore in journalism and senior student producer—reported on University of Illinois athletes’ response to the Black Lives Matter movement and their decision to lead a march in August 2020, which earned her first-place accolades in the Student Spot News category of the Public Media Journalists Association Awards.

“My experience with the Illinois Student Newsroom has been formative in my career as both a journalist and a multimedia storyteller,” Anderson said. “As a reporter, I was plunged into the world of audio storytelling and had the opportunity to report on the University of Illinois Urbana-Champaign campus and the surrounding community. By moving into my role as a producer in the student newsroom, I now edit and mentor other students that were in my same position just a year ago.” 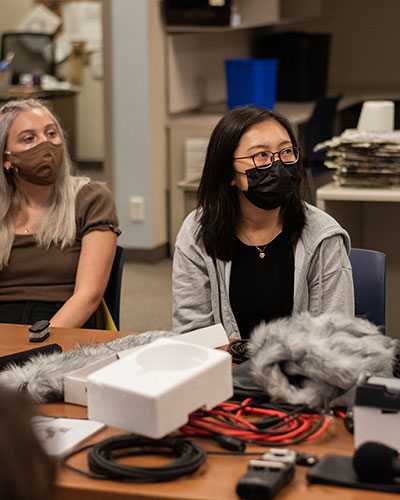 Not only do the students learn from the professional journalists and journalism educators, but the program is also structured where they can learn from each other. Both Anderson and fellow inaugural member, Vivian La, a sophomore in journalism, have gone from student reporter to senior student producer in their short tenure.

“I’ve really enjoyed guiding new reporters on the complexities of audio journalism,” La said, “and hearing their stories on the air is so exciting! I’m very honored to be a part of the newsroom and tell stories that impact our local community. With the guidance of Professor Chris Evans and some of the full-time reporters, I’ve learned something new every week that solidifies my interests in the wide world of journalism.”

The newsroom experience also ensures that student reporters receive professional mentorship and feedback along the way.

“The Illinois Student Newsroom at IPM helps put more central Illinois voices on the air,” said Reginald Hardwick, news and public affairs director for IPM. “These talented University of Illinois journalism students help cover the news on-air and online while working alongside some of the best journalists in public media. We’re glad to broaden coverage, but we are also delighted to help guide the careers of America’s next generation of storytellers.”

Follow the students’ work at will.illinois.edu/studentnewsroom and hear their stories on WILL-AM 580 or illinoisnewsroom.org.