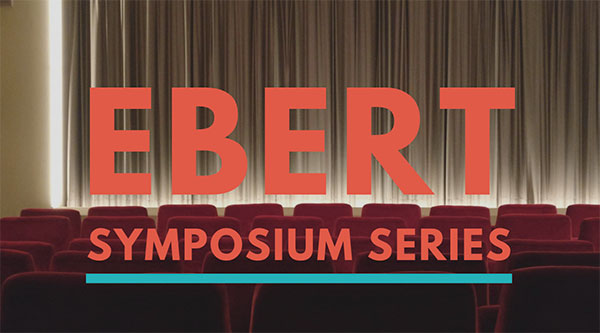 The 2020 Chaz & Roger Ebert Symposium will be presented as a virtual series this fall, bringing together filmmakers and scholars to discuss a variety of issues relevant to the media industry.

The series, which is free and open to the public, premiered on October 8 with a panel moderated by Ebertfest co-founder Chaz Ebert and Ebertfest director Nate Kohn (watch recording below). Each event will be broadcast on both the Ebertfest YouTube channel and Facebook page at 5 p.m. CT on their respective dates. See details about each panel below; more information will be added as guests are confirmed. To submit discussion questions to the panelists, please fill out this form in advance of each event.

Representation in Media
This panel will examine how television, film, and other media represent and portray certain types of people or communities. College of Media faculty member Angharad Valdivia, research professor of media and cinema studies, will lead a discussion of the importance of balanced representation, the need to challenge stereotypes, and show how the media industry has progressed to try to eliminate unconditional bias. Panelists include Christine Simmons, COO of the Academy of Motion Picture Arts and Sciences; and three UIUC alumni including Keri Carpenter (BS ’08, MS ’09, journalism), TV producer and writer; Samantha Chatman (BS ’14, journalism), ABC 7 Chicago reporter; and Troy Pryor (BA ’07, LAS), producer and actor.

The Movie Industry in a Time of Change
The panel will examine the film industry in a time of great change, from the global pandemic wrought by COVID-19 to the protests following the death of George Floyd and concomitant efforts to dismantle systemic racism in the United States.

Moderated by Chaz Ebert and Nate Kohn, the filmmaker panel will examine how movies get made, who gets to make them, and how movies get to be seen and exhibited in light of recent challenges. Panelists include Michael Barker, co-president and co-founder of Sony Pictures Classics; Neal Block, head of distribution and marketing for Magnolia Pictures; filmmaker Melissa Haizlip; Darrien Michele Gipson, executive director of SAGindie; filmmaker Malcolm D. Lee; filmmaker Mary Mazzio; Nina Shaw, founding partner in the entertainment law firm of Del Shaw Moonves Tanaka Finkelstein & Lezcano; and filmmaker Christine Swanson.

The Ebert Symposium, an annual event that began in 2018 and named in part for the late film critic Roger Ebert, is a collaboration between the College of Media and the Roger Ebert Center. Roger Ebert, who died in 2013, was an Urbana native, journalism alumnus, Pulitzer Prize-winning film critic for the Chicago Sun-Times, and founder of RogerEbert.com. His namesake film festival, known as Ebertfest, is scheduled to return to Champaign-Urbana in September 2021.